Microsoft has been, for the most part, of an isolationist mentality. That is, they made their fortune with an apparently strict ideal of focused software production, keeping their information proprietary and close to the cuff.

I will hazard a guess that Satya Nadella, the heir to the Steve Balmer throne as CEO, is at least partly responsible for this unimaginable turn-around. And a most refreshing change, it is.

Something phenomenal has happened of late. Some normally very expensive software has been released by the close-knit corporation as a free download. Yep! You heard me right and I’m here to tell you how to get it.

I can’t believe it myself. This program used to cost in the neighborhood of 500 bucks, American. The licensing agreement for this valuable piece of software says that it cannot be used for Enterprise Production. Well, it also says that up to five programmers (a team) may use it at a time. That includes just about everyone on the planet who would like to do a bit of coding. Hardly a limitation if you ask me.

Visual Studio will let you write code for Windows, Android, and some Apple applications. If you’d like to write some Apps for mobile devices and possibly make tons of money (read: “Angry Birds”), there ya go. It will also let you choose between several programming languages including BASIC, C#, and C++. All Object Oriented Programming (OOP), of course.

A better deal, I can’t imagine. Thank you Microsoft!

I come from a Pascal (Delphi) background but the transition to Visual BASIC has not been that difficult. C-based languages are a bit of a challenge for me due to their more cryptic nature. I guess I just like wordy languages. One thing I particularly like about Delphi is that the source code, with a little planning, can nearly resemble English. It makes for easily understandable code.

This 1.8MB download is just the installer. Be prepared for a near 7GB download session before you’re done. 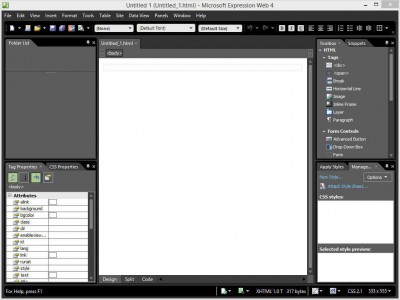 If designing a web site from scratch is something that tickles your fancy, then this bit of software will do the trick. From what I’ve read, it is easier to learn than the massive DreamWeaver. I’ve heard the interface is easier to learn as well. That makes sense. DreamWeaver carries with it an enormous learning curve (believe me when I tell you from first-hand experience). Maybe we don’t really need all that stuff. Of course, it depends on what your goals are, doesn’t it…

I’ve seen the price of this program vary by as much as $100 (US). Anywhere from $300 to as little as $80 (all US dollars). None of that matters anymore because Microsoft is giving it away. No time limit that I am aware of.

Here’s the download link for those of you who would enjoy suffering the torment of creating your own web site from scratch: http://www.microsoft.com/en-us/download/details.aspx?id=36179

Never mind the word “trial” in the download title– it is a free, full download of the program. It weighs in at about 103MB.

I think this is a great step forward. The normally tight-lipped software magnate has finally softened in its old age.

The beauty of this is that the brilliant kid in his dad’s garage or his mom’s basement, who doesn’t have a ton of cash to shell out to some already rich corporate establishment, will be able to create the likes of Tetris once again. Or perhaps the next bit of software that saves lives by the millions (not that Tetris didn’t). Or, just  maybe, this burgeoning  “unknown”  will be the next Wozniak simply because he or she had access to the right tools. Who knows… perhaps Satya is wise enough to realize that the next kid genius may be a future employee? Give ’em the tools! No dummy, he.

The time has come, so let us cherish the hope that this trend continues,

5 thoughts on “Microsoft Is Giving Away Very Expensive Software”