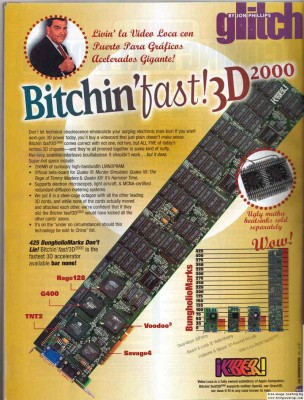 Having cleared out those pesky customers, let’s look at how the retro bug has caught on South of The Border.

Not content with a PC Chips Slot 1, I decided to scout around for a compatible motherboard for a Pentium III 700 Mhz CPU I’d managed to pick up for less than a grain of rice at a local thrift fair the other weekend. The quest then morphed into a diversionary shopping spree all of my own making, with the added attraction of criss-crossing a major South American city on a motorbike, in search of obsolete and retro computer components. This then took me in the direction of an Athlon Slot A and motherboard combo for less than the price of a couple of cold beers. As it turned out, the last and only Slot A I could reasonably lay my hands on and these cartridge processors have an aesthetic appeal that can’t be matched today. 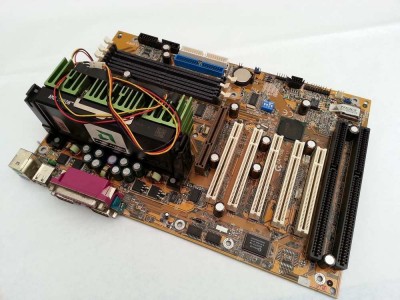 But then, just a motherboard and a CPU isn’t quite enough is it? I already had the Voodoo II’s kitted out SLI (scan line interleaving) mode in the original machine, so the hunt was on for another relic of the past; but could I find a Voodoo 3 or 4, now that 3dfx cards had become collectors items?

By pure chance and perhaps a helping hand from serendipity herself, I managed to snag a box of seemingly dead computer parts at another local thrift fair and there, sitting rather forlornly at the bottom, was a Voodoo 3 3000 AGP card boasting a massive 16Mb video memory which by some miracle, actually worked in spite of the rough handling it had received. This particular model is only fitted with a basic heatsink and, being a notoriously hot runner, the first thing I did was to fit a small fan which connects directly to a motherboard fan header, using whatever materials I had available. Sweetness and light.

In keeping with the retro theme and being a purist at heart, I needed a keyboard that was neither black or white, but beige or at least used to be. Enter the Hewlett Packard KB9970 (circa 2002), which had lain dormant and gathering dust at the back of the shop, connected to a Cyrix 386. This is the kind of keyboard that would survive being dropped from a great height, being dunked in coffee or any other similar calamity and following a total strip-down, wash and rebuild,came up like new with that reassuring clunk and solidity that only an HP component can give you. 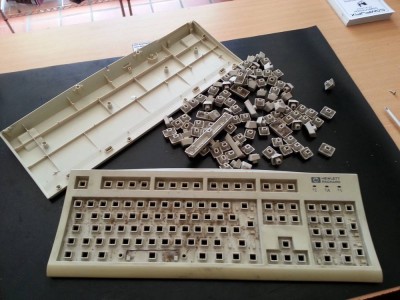 When is retro truly retro?

Good question and one which receives answers commensurate with its subjectivity.

The first computer I ever touched was an IBM Personal Computer (4.77Mhz) circa 1986 and I only remember it now because it had two 5¼ floppy drives and did nothing more interesting than crunch actuary forecasts and print them on endless reams of tractor fed, green-lined paper. I wasn’t impressed.

The first computer I ever owned was a Zenith Data Systems Z-148, which arrived with both a colour monitor and colour dot matrix printer, for which I paid extra and wasn’t much faster than the IBM in reality, but at least it had more bells and whistles. These two would now be considered vintage computers and for me, simply don’t fulfill the function I would demand, which is gaming. Others would say that they’re simply nice to have around and would probably increase in value over the years, so it’s really what drives you in the end.

It’s also true that the later 386/486 PC’s were capable gaming machines up to a point, but when 3dfx launched the Voodoo video chip in 1996, a new era in 3D gaming had begun and instead of watching a moving blob of jagged pixels wandering around your screen, PC games were finally brought to life in real 3D.

Here is a good comparison:

The history of 3D cards has been written about extensively and whilst the Bitchin’ 3D image at the top of this article is a great parody of the times, it shows that bigger wasn’t necessarily better and 3dfx’s last and unreleased video card, the Voodoo 5 6000 was indeed humongous and the few test cards that were actually manufactured are now in the hands of collectors and much sought after.

As with many forms of retro activity, such as turning a lathe in a home workshop to produce a motor part that no longer exists, groups of enthusiasts have the will and find a way to overcome problems and indeed to improve both obsolete hardware and software.

Windows 98 is a fine example and whilst many would question the validity of improving and updating an obsolete operating system, unofficial service packs have taken the OS up to Service Pack 3, updated as recently as September of this year and there are many reasons why you might want to run such an old and seemingly outdated operating system, namely, compatibility. 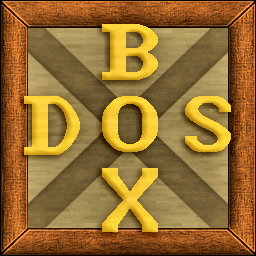 Whilst Microsoft has given us Compatibility Mode in XP and beyond, it doesn’t always work as we would like and if you’ve spent more time than is safe for your sanity trying to cajole a device to actually start breathing, you’ll probably realise that actually going back in time is in fact going to be your best option. That isn’t to discount virtual systems such as Virtual Box and VMware entirely, although I haven’t had experience with the latter, I’ve never had any luck with Virtual Box’s so called experimental 3D acceleration in gaming whatsoever. Emulation, such as DOSBox on the other hand, simply works if you’re prepared to put a bit of work into it, but in the end, by far the purest form of retro, is the real McCoy and installing the operating system the device or software was designed for in the first place.

Reference drivers from original manufacturers are generally easy to find all over the net and I’m specifically talking about older hardware on older operating systems. Further, many enthusiasts have written new and unofficial drivers, that offer greater compatibility and performance enhancements over the originals.

So, dust off that old and creaking Pentium you found in the local garage sale, power it up and surprise yourself.