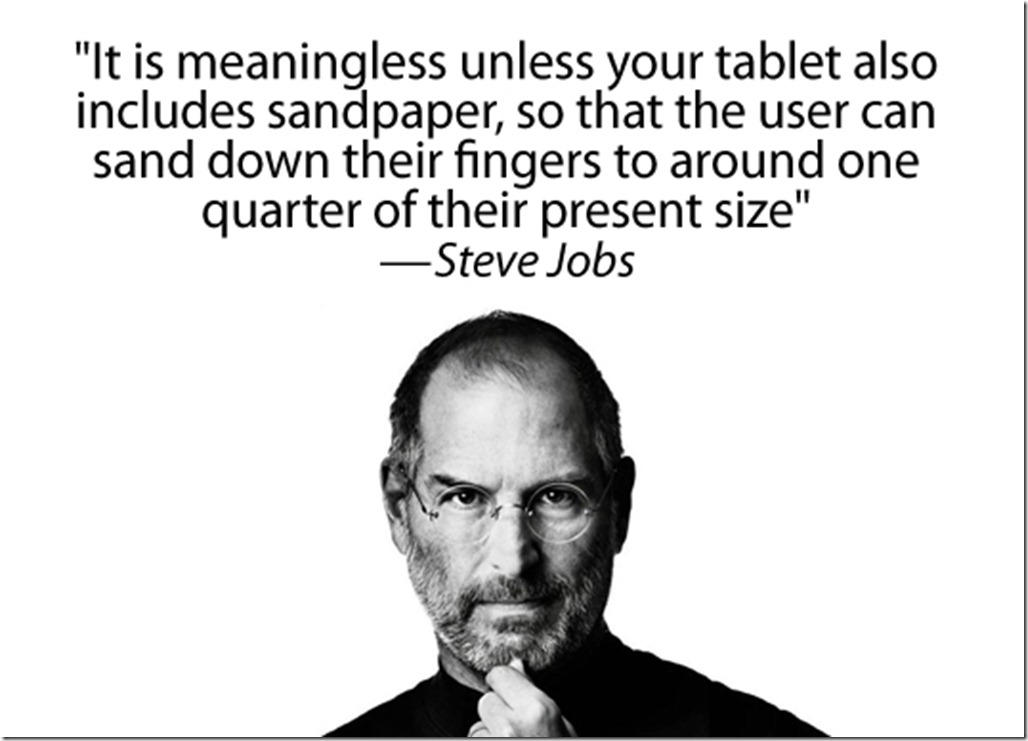 In an earnings call with Apple in October of 2010, Steve Jobs was talking tablets, namely, the iPad. The call featured Jobs boasting about the number of iPhones (14.1 million) and iPads (4.19 million) the company had sold in the previous quarter. This was the start of Apple’s domination in the tablet arena, and Jobs couldn’t have been happier. But when asked about the competition coming from Samsung’s Galaxy Tab, Jobs famously shot-down the idea of a smaller iPad screen. He went on to explain (from Gizmodo):

The reason we wouldn’t make a 7-inch tablet isn’t because we don’t want to hit a price point, it’s because we don’t think you can make a great 7-inch tablet. Software developers aren’t going to deal real well with all these different products where they have to resize their software… We’re all about making the best product at aggressive products. […] You can make it smaller and put a slower processor on it and less memory, and you assume that the software will somehow come alive on this product you’re dreaming of, but it won’t.

So there you have it: Steve Jobs didn’t think the company could make a smaller tablet that they’d feel comfortable putting the Apple name on. If you remember when the iPad launched (like with many other Apple products) the advertisements and keynote addresses all featured the adjective magical to describe the new device. It’s hard to use the term magical to describe a product that simply scales up—lag included– smartphone apps on a bigger screen.

Though it seems Apple may have changed it’s position on the tablet screen issue, according to the Wall Street Journal. Perhaps it’s a dream that could only materialize after Tim Cook took the reins, and maybe this is just more of the speculation and hope that bookends every Apple announcement and product release. If there is any truth to the WSJ article, Apple has been in talks with screen suppliers and manufacturers, showing them a design for an 8 inch screen. While it’s not the 7-inch display Jobs so vehemently opposed, the nearly two-inch screen-size decrease would be a major change for the company and product that has been received so well. However, even if the new plans are in the works, it certainly won’t be in time for Apple’s (rumored) March time-frame for announcing its next installment of the world’s most popular tablet. Even if prototypes of the device come to fruition, Apple may ultimately kill the product before it ever sees the light of day.

Apple, which works with suppliers to test new designs all the time, could opt not to proceed with the device.

I think this option—testing an 8-inch iPad before deeming it un-magical—is more likely than Apple about-facing on something Jobs said so early after his death. I’d like to be proved wrong though: I always welcome competition in the Tech industry.

2 thoughts on “Is Apple changing its course on iPad size?”