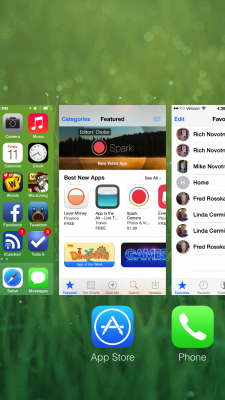 In iOS 7, how to close your apps has changed.  Prior to iOS 7, you tapped the Home button twice to display a row of icons at the bottom of your screen for all of the apps that were running in the background.  Then you would tap and hold one of the icons until they started to wiggle and have a red cross in the corner of each icon.  You then tapped the icon to close an app.

STEP 1:  Double tap the Home button (just like before).  Now you will see a full screen displaying the icons on the bottom and thumbnails above them for each app.

STEP 2:  Swipe up on a given thumbnail to close an app.

Since the screen displays all or part of three thumbnails, you can close up to three apps at a time by putting a finger on each of the three apps and swiping up simultaneously.