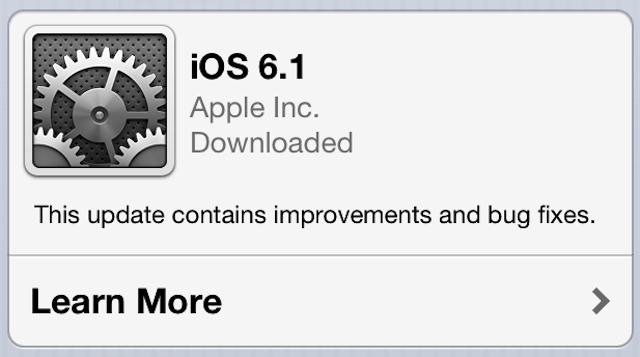 Apple released iOS 6.1 on January 29th. I haven’t gotten around to updating my iPhone and iPad yet. Usually I wait a couple of days as opposed to weeks after the release date but things have been fairly hectic lately. For reasons explained below, I think I’ll wait for the next update to come out before updating.

There are a couple of new features in iOS 6.1, such as:

• Bug fixes – No details were provided, which is pretty standard.

Earlier, I mentioned that I am going to wait for the next update before updating and here’s why. There has been anecdotal evidence provided by users on Apple’s support forums of issues with iOS devices running hot and having greatly diminished battery life once the device has been updated with iOS 6.1.

The cause of the problems is not known but, as reported by Computerworld, some blogs are proposing the theory that the OS gets in an infinite loop with Exchange mail servers which, in turn, causes the fast battery drain. Some users have even reported resolving the battery issue by deleting and reinstalling their email accounts.