Before I dig into moving files to and from RAMDrives, let me tell you a little about what a RAMDrive is.

Its name perfectly describes what it is. It is a Drive that resides in RAM. In other words, with a bit of software magic, you fool Windows into believing that a hard drive exists where one does not. It is also called a virtual drive by some.

Basically, you “create” a hard drive in your system’s memory. This is done with third-party software as Microsoft no longer provides for an innate RAMDisk system. They used to in the old Windows 9x days.

The great thing about RAMDrives is that they are extremely fast. Much faster than even the most modern Solid State Drives (SSDs). They blow SSDs clean out of the water in terms of sheer speed.

There are a couple of downsides, though:

They are volatile. This means when the power is cut off, so too is your data or anything else you’ve stored there. Lost. Gone. There is a way of getting around this problem and I’ll tell you about it shortly.

RAMDDrives use Random Access Memory (RAM). If you have 8 GigaBytes (GB) of RAM and setup a 4GB RAMDrive, you will have 4GB of RAM left over for Windows to use. On the other hand, you will also have a very fast 4GB drive to use. Everything in life is give and take, isn’t it…

The number of third-party RAMDrive solutions “out there” is remarkable. I only recommend one that’s both free and reliable, albeit somewhat tricky to set up. There is both a free and paid for version and you can find it at DataRAM.

The difference is that the paid version does not limit the size of the RAMDrive you wish to create whereas the free version is limited to 4GB. There is also a nag screen when the program is first fired up. They are in the business of selling RAM so be prepared for a few ads. I don’t blame them.

It is the RAMDrive software I’ve been using for years and I’ve never hit a snag. I’ve used it on all Windows versions from XP onwards.
Disclaimer: I have no affiliation with DrDataRAM nor will I receive any compensation from them for plugging their name. I simply like the program, have been using it for years and am passing along this information to you.

When first conceiving this article I never anticipated having to describe how to install a RAMDrive nor did I expect that information on how to move entire folders without “breaking” Windows might be required.

Installing a RAMDrive is pretty straightforward. There are some tricks involved but discussing these is beyond the scope of this post. Besides, these “tricks” are peculiar to the individual RAMDrive software you choose to use.

See these articles about RAMDrives and suggested uses. They are right here on Dave’s Computer Tips!

RAMDrive: Increase Computer Speed by up to 50%
How to setup and use a RAMDrive – Part 1

Moving Folders and Files to a RAMDrive 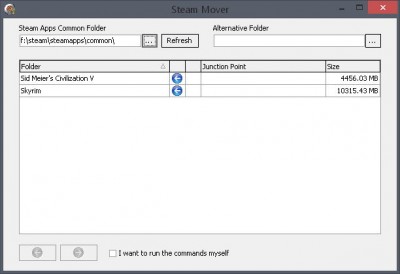 When it comes to moving folders about, Windows is particularly sensitive. Windows will throw its frustrated electronic arms in the air if you do it wrong. It may even get so annoyed with you as to not work at all. Be careful. Make backups. Take things one step at a time. Think it through– “If I move this, how will it affect that?”

Junction Points – The Difference Between Moving a Folder and Fooling Windows

Let’s just say that you want to put your My Documents Folder on a RAMDrive. First off, Windows won’t let you simply delete it. It’s a System Folder that Windows expects to be there.

The alternative is to tell Windows to move it for you, or you can simply fool Windows into believing that it’s still there– even though it’s not. That’s where Junction Points come in.

Windows uses Junction Points all the time. The Libraries are a classic example. You can add a multitude of folders to any Library. The files aren’t actually moved there,. only pointers to those folders are added. So, when Windows looks in your Movies folder on Drive X, it can find them in the Library folder, but they are actually stored on an entirely different drive. Windows creates its own Junction Points. You can, too.

You can do this manually, which is a geeky sort of thing, or you can use yet another third-party tool called SteamMover.

You’ll find the download link near the bottom of the page under Version History. The utility is not the newest (2010) but I used it on Windows 8.1 with Update 1 and had nary a problem.

SteamMover was originally written so gamers could move there Steam-oriented games to another drive for whatever reason that seemed important to them at the time. It can also be used to “move” any other folder your geeky self desires.

You’ll be moving the folder and its contents, but Windows won’t know that. As far as Windows will know, all the folder contents will still be sitting there in the same place. The SteamMover site explains all this.

This has many advantages not the least of which is that you don’t have to re-install programs, games, or any other applications. All you are doing, in effect, is changing some pointers. Creating a link, if you will. It’s just like creating a Short Link on your desktop that points to where the program actually resides, only on a slightly deeper level.

What To Put On Your New RAMDrive

There are many arguments on what to put and what not to put on a RAMDrive. A few ideas are all those temporary files that are generated by both Windows and your browsers. They are great candidates.

I keep temporary system and user files on the RAMDrive. All my browser caches are there, too. The My Documents Folder has been moved there because I don’t want all those Game Save files on my puny SSD. A beneficial side-effect is by moving these oft-written files off the SSD you are increasing its life span by reducing write operations.

One option that I seriously oppose is putting a Page File on a RAMDrive. The only exception is if you have a ton of RAM to begin with, don’t need a Page File, and an old program you use demands a Page File anyway. Silly, but it happens. Even Windows wants a Page file for its dump file regardless of how much RAM you have installed. That’s when it finds an irreconcilable difference and needs a place to save the error log.

My current purpose is to tell you about my experience while attempting to place an entire game on a RAMDrive, the journey, and the conclusions based on my endeavor. It was not a happy one…

Civ V comes in at about 5GB installed without any Mods. In order to begin thinking about trying this you have to have quite a bit of RAM installed on your computer. I have 16GB so there is a bit of room to spare. I wish I had 32GB. 512?

I knew from the onset that putting Civ V on a RAMDrive would in no way improve the performance of the game itself. That is limited by the Central Processing Unit (CPU) and the Graphics Processing Unit (GPU) that I have installed. I did know, however, that all the file access times would be reduced drastically. This would include file saves and loading, loading times of the game itself, and any other file access it deemed necessary at any given time.

That was enough to entice me to give this a shot.

I will say this, after a couple of hours messing around with changing the size of the RAMDrive, which is not necessarily an easy task, and using SteamMover to get all those files where they belonged, I was delighted when I saw the lightning speed at which the first few screens flashed by.

Then the doldrums set in. I knew the game wouldn’t play any faster, but I was still disappointed somehow by the end results. Apparently, Civ V is not the best game to try this with. A couple years ago, I did this with Skyrim. I suffered the same disappointment although it did show more improvement than Civ V. Skyrim loads a lot more files throughout game-play and allows a RAMDrive to shine.

A monitor I use (see Jim’s great article Peeking Under the Hood: System Information & Monitoring Tools and look for Moo) showed that I was dangerously low on available RAM, the game showed no obvious signs of improvement, and ultimately the whole effort was a colossal waste of time.

I was now faced with the unhappy task of reverting all my efforts to the original set up. This was disappointing and took me another hour to complete.

Perhaps not a total waste of time

I learned something along the way– never stop experimenting. You don’t really know unless you try. You can read all the articles you can find on a given subject until you’re blue in the face, but you really don’t know until you tackle the job for yourself and compare notes. An identical set up will be unique and respond differently on individual systems.

By writing this, I may have saved some of you from a long, terrible ordeal with no appreciable results. On the other hand, I may have inspired some of you to try something that is “Out of the Box”. Hopefully, the latter… and I wholeheartedly wish you success.

I’d like to hear any revelations or horror stories you’d care to share along these lines. What crazy things have you tried?