There are many cloud synchronization solutions offered by major companies on the Internet these days. Microsoft has OneDrive (formerly SkyDrive) in its arsenal to follow the pack. The familiar DropBox is one, along with Amazon, Google, and many others. Regardless of which one you choose, they all do pretty much the same thing. They will synchronize files on your local drives to the “cloud”. In this case, the “cloud” refers to their servers. These companies generally offer you some free space to get you started, then more storage can be added for a fee. Here is how today’s OneDrive payment plans break down: 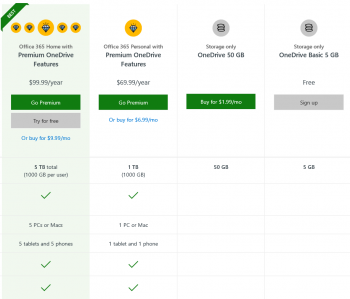 It shouldn’t be necessary to tell you to back up your computer before following these steps. Especially true when uninstalling major software such as OneDrive, things can go wrong. Please make a backup of your system before you begin. You may thank me later.

What if you don’t use OneDrive? And if you don’t, maybe you don’t even want it installed on your computer. Or, maybe, you’d like to simply disable it for the time being. Well, all of these choices can be made and implemented and I am going to show you how… right here… today… and there won’t be no danged payment plan, neither.

How To Enable/Disable OneDrive

Disabling OneDrive is about as easy as things can get. 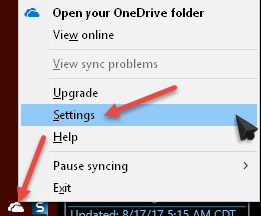 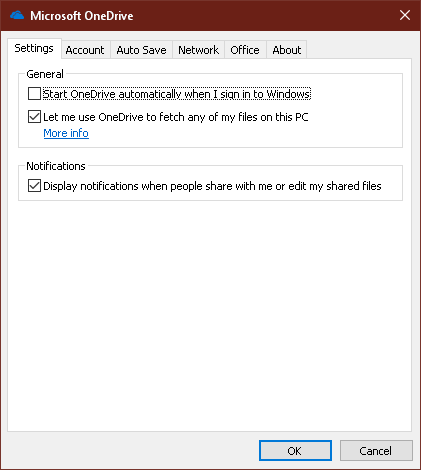 When you reboot your computer, OneDrive will no longer be running in the background. If you change your mind, simply check that box to get OneDrive running at system boot time. Or you can do as I do and run it manually from the Start Menu whenever you need it.

How To Uninstall OneDrive

If you really want to get rid of OneDrive completely, you will have to do a few extra things. Before you begin you will need to know whether you are running a 64-bit or 32-bit system. If you don’t know, you can easily find out by right-clicking the Start button and choosing System.

That should bring you to a window like this: 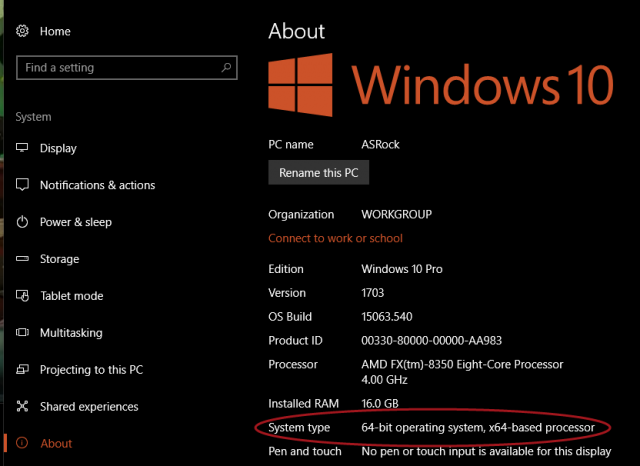 At this point we want to make sure OneDrive is not running. If you don’t do this, the rest of the steps won’t work properly.

Note: The /f and /im switches in this command specify to (F)orcefully terminate the process, and to use the (IM)age Name (in this case, OneDrive.exe).

Depending on the system type you are running, use one of the following appropriate commands:

It may appear as if nothing is happening, but Windows will be uninstalling OneDrive in the background. The OneDrive icon should disappear from the System Tray. At this point you might want to reboot your computer to verify that OneDrive is no longer running.

If you really want to go the final measure, you can remove all the associated files and folders, as well.

Note: The following steps presume OneDrive was set up in its default location. If you have moved OneDrive, then this won’t work as expected.

Enter the following commands, one line at a time, each followed by the Enter Key:

Each of the above commands removes a directory (RD) indicated by the following path. The /Q and /S switches cause the command to be run in (Q)uiet mode and to also remove all the (S)ub-directories below the indicated path. Given the importance of detail when composing DOS commands, might I recommend copying and pasting the above commands. This will help lower the chances of typographical errors.

If you are brave and choose to type them in yourself, pay special attention to the quotation marks and spacing. You may see spaces as empty spots, but your computer sees them as characters. They must not be ignored.

Note: Since I don’t want to remove OneDrive from my computer, I will not be able to provide you with images for these steps.

How To Reinstall OneDrive

Tomorrow, next month, or next year you may decide that you would like to once again give OneDrive a go. Reinstalling OneDrive is pretty straightforward. Run the installer, answer a few questions, and you are on your way. In any case, you should probably reboot your computer before beginning, for peace of mind and a somewhat clean slate.

You may use any file manager, but for this exercise we’ll be using the Windows default, File Explorer. Once File Explorer is running, drill down to this location: C:\Users\USERNAME\AppData\Local\Microsoft\OneDrive\Update\

Run the OneDriveSetup program. At some point you will be prompted to enter your Microsoft Username and Password. You may also be asked where you would like your OneDrive folder to be placed. (I like mine on a separate partition, but the choice is yours.) The default placement is on your system drive (usually C:\).

Note: Things changed in Windows 10. In Windows 8.1 you could specify that files would only be marked as placeholders on your computer in order to save on local drive space. I have seen reports that a similar feature is returning to Windows 10 in the Fall Creators Update which is due in September or October this year.

There is confusion here because the version number is supposed to be 1709 which would indicate a September roll-out, but Microsoft keeps mentioning October, so your guess is as good as mine at the moment. I am leaning towards October, though.

I like OneDrive, but I only use it as yet another backup location. I don’t leave it running all week long and only use it as part of a weekly backup routine which runs maybe two hours or so. I do notice a definite slow-down in Internet throughput when it is running and I’m sure this has something to do with the fact that I’m on the tail end of a rural network running at a paltry 10Mbps.

If for no other reason than as a new backup location, I think any cloud service is a great benefit. Don’t make the common mistake of believing that what you send to the cloud is safe, however. With the possible exception of bona fide backup solutions, none of theses companies guarantee against data loss. Read the fine print.

If you have any helpful suggestions and/or comments, please share them with us,

14 thoughts on “How To Uninstall/Reinstall OneDrive”