What is thermal margin?

Over the years I’ve used both Intel and AMD processors and whichever monitoring utility I’ve used, it has always reported the real temperatures at core and socket. Since upgrading one of my PCs from an AMD Phenom II 965 to an AMD FX 8320, it became clear that AMD had changed the parameters for temperature monitoring on it’s later CPUs and APUs.

You see, that definition alone is enough to have me scratching my head. It’s not that I don’t understand the logic behind it, but it runs counter to the way my poor wee brain operates. For example, if you were to watch a weather forecast and the presenter told you that the thermal margin for today was going to be around 46c (114.8f), you’d either run for the hills or phone the TV station to take them to task over such a statement. On the other hand, if the presenter had first explained that the thermal margin represented a safe buffer zone of 46c before your body reached a critical temperature of 60c and that it was up to you to do the maths IE subtract 46c from 60c to arrive at 14c, you’d probably still be scratching your head wouldn’t you? I know I would.

In the image below I’m using an earlier version of AMD Overdrive on the FX 8320 which quite clearly is reporting a strange temperature way below ambient.

On the other hand, with a later version of AOD which reports Thermal Margin, things become a little clearer. 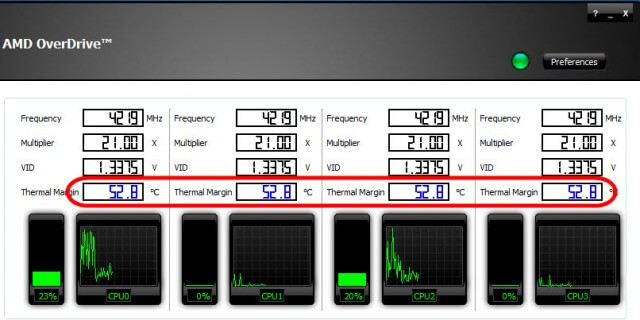 They key here is that Thermal Margin will decrease under load, thus shrinking your safety envelope, and increase whilst idle.

Still as clear as mud?

Yes, it is for me too, but in basic terms, when your Thermal Margin safety envelope runs out of numbers (i.e it reaches zero or thereabouts) the CPU throttles back to prevent damage. This table shows a little of how this is calculated: 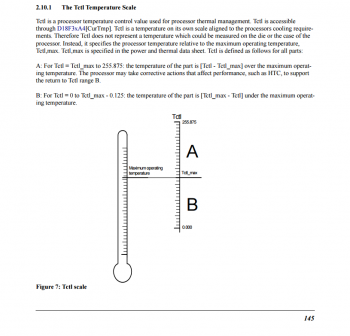 Clearly AMD have researched thermal states in CPUs a great deal and since I’m not a scientist I’m in no position to criticise. However, if I know that the safe maximum temperature of a processor is say 70c (158f) and I see that the temperature reading is 35c (95f), I’m a happy bunny, put the kettle on, make myself a cup of tea and carry on gaming. If it’s showing 50c (122f) and over, I’m going to wonder why and will probably shut down the PC and investigate further. Much like if it gets to around 30c in the shop, I switch on the air conditioning or in my case, the small fan by the desk. And if the weather forecaster says it 35c outside, I know that’s hot and can proceed in shirt sleeve order. On the other hand, if he says we’re going to have a safety envelope of around 40c before we start falling over, I’m going to get very confused and will probably start throwing things at the TV.

5 thoughts on “How to Understand AMD CPU Temperatures”