When was the last time you downloaded a software update, only to find you also invited half the street to join in the fun?

You see, personal computing today can be akin to throwing a party and spending the rest of the evening fighting off hordes of gatecrashers. Everyone wants a piece of the action and if you’re not standing at the front door wielding your shield and sabre, it could get ugly.

So, picture the scene. You’ve just installed an untouched, virgin copy of Windows on a new hard drive and you’re ready to rock. There’s only one snag; you lost the the CD that came with the PC, the motherboard is showing it’s age and that obscure sound driver is proving illusive. It’s not much fun watching YouTube without sound is it?

Assuming you know the exact model of your sound device, you find the driver at Driverguide, which is promoted as  ‘The worlds’s most popular driver download site since 1996…‘

You’re suitably unimpressed by this claim but nevertheless proceed to download that pesky driver anyway and the voyage begins thus:

The Devil in disguise

If you made it to stage 10 and can still remember why you were on Driverguide in the first place, you deserve a medal for persistence at the very least. But if you weren’t paying attention during the prolonged ‘driver download’ process and clicked NEXT at every turn, your troubles have only just begun.

We can see from the slideshow that without taking evasive action, the user will install a minimum of FIVE totally useless browser addons, toolbars and other rubbish that do nothing more than compromise your system, almost bring it to its knees and jointly redefine the unholy definition of crapware.

Going back to our raving party, this would be much like discovering that your gatecrashers were in fact your ex wife, your mother in law, your ex bank manager and an unsavory mix of all their relatives, which is not what you want is it? 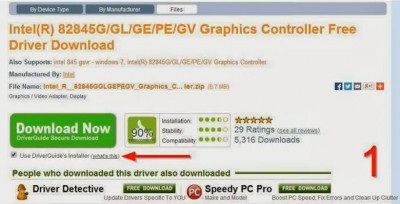 Take a closer look here and you’ll see that ‘Use Driverguide’s installer‘ is ticked by default and guess what?

You guessed right, you can’t untick that.

The tick is stuck in that tiny box permanently.

You do however have a chance on the next screen, to hand over $2.99 and download the driver directly without using their installer.

How cool is that?

You may also have noticed that on screens 1, 2 and 3, they are trying to push a further FIVE other programs down your eager throat in preparation for the crapware-fest later on.

And there’s more to come

It could be argued of course, that if you managed to swerve your way through the chicanes, twists and turns presented to you by Driverguide and you managed to NOT hand over the princely sum of $2.99, you got your pesky driver and no harm was inflicted upon anyone.

Not only can you see You Tube now, but you can hear it, so what’s the all the fuss and malarkey all about, I hear you ask?

Simple really; nobody should have to pay for a device driver and this type of cynical social engineering preys upon those who  are the least prepared for it.

Of course, this practice isn’t confined to driver downloading; it’s now become all pervasive and has been written about on Dave’s Computer Tips on numerous occasions.

Take a look at these shots and see what you think.

One has to wonder how many pennies Oracle and Adobe actually earn from the clicks on ASK, McAfee and Norton respectively and more importantly, is this practice ethical?

In the case of Norton Security Scan, many users consider this to be SCAREWARE, as the version bundled with Adobe, DivX and others doesn’t actually fix anything; the scan simply directs you to a page where you are asked to purchase a Norton security product, which to me is much like holding a person to ransom.

The best advice here is to be attentive and think twice before clicking NEXT.

Do NOT pay for device drivers; life is expensive enough as it is and all the reputable hardware manufacturers offer their device drivers as FREE downloads in any language at any time.

Having de-loused numerous machines in recent years, here’s a small example of the CRAPWARE I’ve removed and is best avoided.

On one PC, which I remember fondly, it was equipped with almost all the crapware mentioned above, together with Norton and McAfee security scans as well as a browser similar to the toolbar festival shown in the first picture. The customer wasn’t entirely dissatisfied with the performance, but she did concede that it wasn’t as fast as it used to be.

But hey! When in doubt, you can always click CANCEL can’t you?

10 thoughts on “How do you handle crapware?”