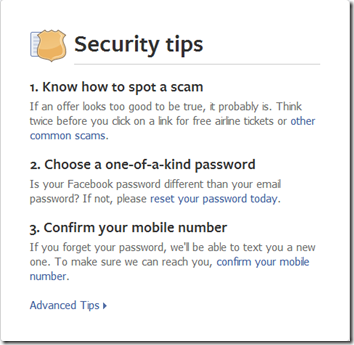 Today on my Facebook news feed I saw a little box from Facebook talking about how to manage the security of my accounts. When I followed the link, it brought me to a great page within Facebook about security on the network. On that page, you’ll find the tips box I’ve included to the left, as well as a great video about Facebook Security.

There is also a link to a timeline profile page for Facebook Security. Just like with any timeline profile, the most recent updates on Facebook security will be at the top. This gives Facebook a place to both publicize its most up-to-date security news and engage with users who provide feedback about privacy issues and concerns.

The final Facebook security link from that initial page can be found by clicking “Advanced Tips” underneath the simple tips box. This page offers a wealth of security information and resources. In fact, there is so much here that I will probably have to cover some of these features in length later. Basically this advanced security page gives users a place to learn about Facebook security, manage their security setting, and troubleshoot problems.