The phrase “graphical disk map” is a general description for a group of software, both commercial and free, which tells you the size of a folder or file with a graphical representation, OR it is actually the precise name of a specific piece of software (free BTW) which does that job.

That graphical representation can be a pie chart, a bar chart, 3D boxes, or any kind of visual representation that gives the user some idea of the size of the folder or file in relation to the size of other folders or files on the same storage medium. (The use of the screen shot for “JDiskReport” here is just for the purpose of an example . . . it is one of the many graphical disk maps out there, and this article is NOT about JDiskReport specifically.)

Now what is the usefulness of these utilities?

Well, if you want to play Suzie Spotless and remove old files/folders you no longer need or use, they give you, at a glance, a good handle on which files/folders take up the most space on your disk… in other words, what would get you “the biggest bang for the buck” for if you deleted it. They can have other uses, but “getting rid of clutter” is a primary function.

Now there are some disk maps… and they’re mostly commercial, not free… which will actually “automatically” delete certain files you name with certain parameters (like “anything over xxMB”, or “desktop.ini” files, or ReadMe files, whatever).

However, for those of us who don’t like our machines doing anything “automatically”, these kinds of disk maps are not what we want. I don’t like it when my machine does ANYTHING without telling me first and then asking me if it can do it (sometimes I have to tolerate that, but rarely.) Consequently, I don’t use these “automated” disk mappers, but rather scrutinize each and every file before I make any decision to delete.

That’s probably primitive to some degree and is very tedious, and a lot would comment: “You’re defeating the whole purpose of a computer. A computer is supposed to make things easier for you by automating certain tasks.”

My answer to that: ‘Batch files and scripts can automate things if I want, BUT I AM THE AUTHOR of those things, not some third party developer who thinks he/she knows what’s best for me. And as far as the extra features (like automation) in disk mapping commercial software, I am certainly not going to pay for a feature I’m not going to use.’

Now since I’m a ‘nix kinda guy (and DCT addresses ALL operating systems, not just Windows), my graphical disk map of choice is . . . remember I said it was not only a general category, but also the precise name of a specific piece of software . . . drum roll . . . “Graphical Disk Map”: 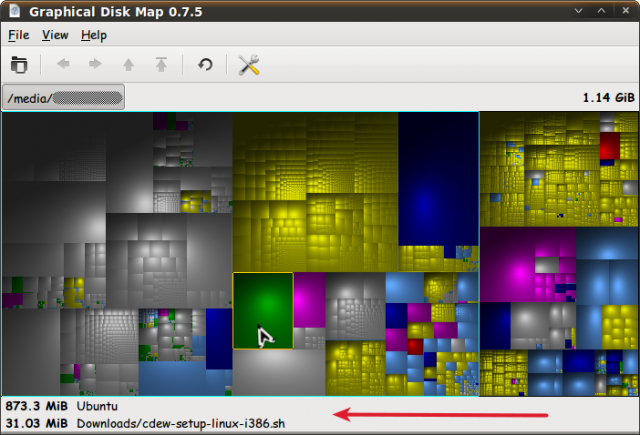 First of all, this is a disk map of one of my USB sticks.

Each 3D block  is a folder or a file within a folder (a graphical representation I like because it appeals to my eye, for example – pie charts often get me confused when I try to drill down). Of course, you may prefer a different form of representation.


Whenever you hover the mouse over a block, the status bar will identify the master folder (shown by the blue outline in the graphic), in this case, “Ubuntu”, and it’s size, in this case 873.3MB, and then the subfolder/file (the green block over which the pointer is hovered), which in this case is “Downloads/cdew-setup-linux-i386.sh”

What this all tells me is several things.

The “Ubuntu” main folder is the largest on that USB stick, so if I want to go hunting for things to delete, this is a good place to start.

It also tells me that the file “cdew-setup-linux-i386.sh” occupies quite a bit of space on the subfolder “Downloads”, which in turn is part of the 1st level folder “Ubuntu.”

So now let’s drill down a little further and see how much of “Downloads” this file takes up: 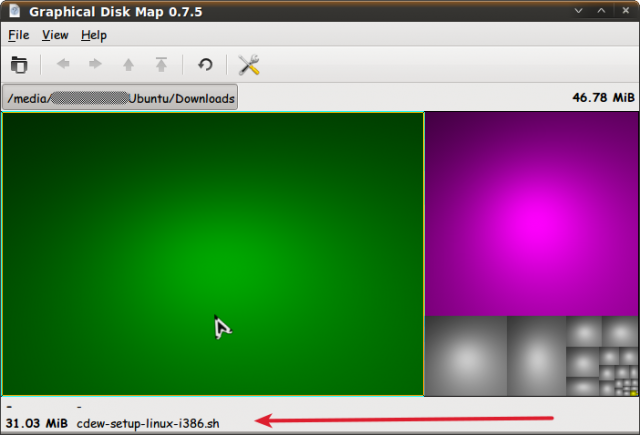 Most of the folder! So now my curiosity is really aroused, because I had absolutely no idea why I had this file or what it was for.

(The designation “sh” is a Linux extension for “shell script”.)

Going into my file manager now, armed with the graphical disk map info, I see that the file is dated 2009 and Googling I see it’s for a piece of software called “CDEveryWhere”, a commercial cross-platform CD burner.

I’m not much for commercial software, I’ll utilize freeware wherever and whenever possible and can probably count on the fingers of one hand the titles I’ve paid for. “CDEveryWhere” IS NOT one of them. Nor am I particularly occupied with sharing CD burns with others who have a different OS (Indeed, I can’t recall ever having done that.)

Plus, if something is stored on a USB stick, it likely isn’t part of the OS anyway.

Why in the world I had this file I still have no idea, but it’s an excellent candidate for deletion and I’m 99% sure it’s clutter. I will probably investigate a little more, because to me deletion of a file can be a serious business . . . I don’t want to shoot myself in the foot. It might have been part of an old Linux OS I had at one time and no longer use . . . who knows?

But again, the fact it’s on a USB stick tells me it’s not part of my HDD OS.

So, GDM led me down a worthwhile path here.

With USB sticks and hard disk drives now being so cheap and large, gaining more disk space is no longer as important as it once was.

But, in addition to behaving as clutter, these needless files can also take up extra time when scanning with something such as an AV. So it still makes sense to eliminate them and cut down on needless scanning.

Now, since DCT addresses Windows issues too, there IS a piece of Windows software which has the Linux GDM look, and it’s called “WinDirStat” and can be downloaded at http://windirstat.info/download.html :

You can see in the lower pane of WinDirStat that it resembles GDM… I suspect because GDM is open source code and the developers for WinDirStat just grabbed it (legit of course).

But even though both use similar 3D boxes, there are some nuanced differences between WinDirStat and GDM. And for those who consider Linux software superior to Windows software, you might not like this, but WinDirStat is actually more robust (more features) than GDM.

First of all, in the upper left pane, you can see that WnDirStat allows you to see a tree structure WITH a bar graph display which matches the 3D boxes.

And in the upper right pane you have file type colors you can identify in the 3D boxes. So if you’re looking for, say .pdf files, you can spot them right away by the color of the 3D box.

The WinDirStat screen shot is exactly the same disk space as the first GDM screen shot, so you can compare the two. Clearly, WinDirStat shows more information than GDM, though for my purposes GDM is certainly adequate.

Windows or Linux, you’ll have all the info you need to get started on ridding yourself of clutter with graphical disk map software.

2 thoughts on “Getting Rid of Clutter”