In 1932, Robert Dennard, the inventor of Dynamic Random Access Memory, was born. 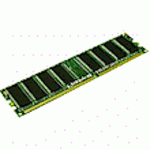 in the mid-1960s, Random Access Memory (RAM) required an elaborate system of wires and magnets that was bulky and power hungry. Dennard’s revolutionary achievement was to reduce RAM to a memory cell with only a single transistor. Dennard won a patent for his one-transistor RAM in 1968. By the early 1970s, it was commercially available, and by the mid-1970s, it was standard in virtually all computers.