In 1989, NASA launched Magellan to Venus. 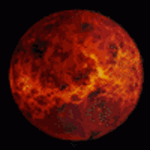 The Magellan spacecraft was named after the sixteenth-century Portuguese explorer whose expedition first circumnavigated the Earth. It arrived at Venus on August 10, 1990.