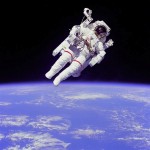 Bruce McCandless helped to develop the Manned Maneuvering Unit (MMU), a rocket-propelled backpack that was worn by an astronaut during shuttle spacewalks. During STS-41-B, aboard the Challenger space shuttle as a Mission Specialist, McCandless tested the MMU in spacewalks and thus became the first person to fly in space without being tethered to a spacecraft.