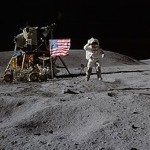 Learn more about the Apollo 16 mission at http://spaceflight.nasa.gov/history/apollo/apollo16/index.html