With the introduction of its latest innovation, it appears GE may have set some kind of record for the ultimate in miniaturization. In a move which has the potential to revolutionize consumer electronics and usher in a new generation of thinner, quieter, and more powerful tablets/laptops, scientists at GE’s Global Research Labs have taken a cooling system originally designed for massive jet engines and adapted the technology to suit the comparatively tiny electronic devices.

According to Peter de Bock, Lead Thermal Systems Engineer at GE Global Research, the technology behind GE’s cooler is called ‘DCJ’ (Dual Piezoelectric Cooling Jets). Basically, DCJ acts as a miniature bellows pump; expanding and contracting at high speed (up to 150 times per second) to draw in cool air and expel hot air.

The device is just 3 millimeters thick, or around 1/8″ for the imperialists. Comparable cooling fans, which move the same amount of air, are approximately twice as large, consume double the electricity, and are much more expensive to make: 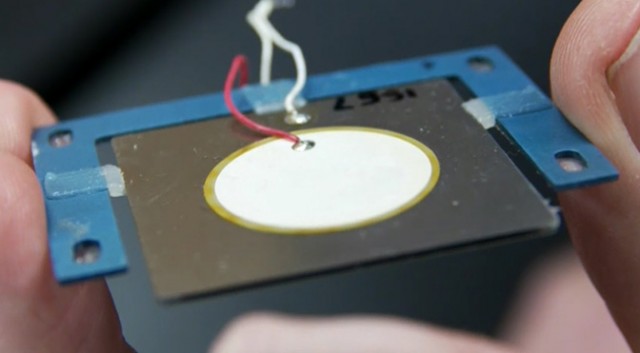 Apart from the obvious impact on laptop and tablet design, allowing for slimmer more compact sizes (or more room for additional componentry), the technology has the potential to significantly boost battery life and also operates at much quieter levels. According to GE VP Chris Giovanniello, “DCJ can be made so quiet that users won’t even know it’s running.” This is largely because there are no bearings or DC motor required, and no blade whizzing round at a rate of knots… but also because the DCJ system can support broader levels of localized cooling. GE suggests that, instead of elaborate heat pipe and fan assembly, you might instead have a number of smaller, more efficient DCJs attached directly to any components that require cooling.

Don’t hold your breath though; although GE is already providing manufactures with kits so they can test the DCJ technology in next-gen laptops and devices, it’s likely to take anything up to one or two years before we actually see this new cooling system adopted commercially.

See the DCJ in action (approximately 2:15 into the video):

(Apparently, the safety goggles are compulsory apparel throughout the GE labs)