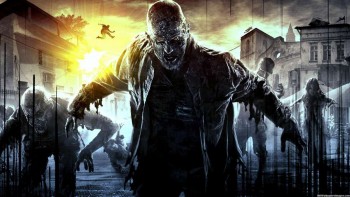 Walkers, biters, lurkers, roamers? Whatever your fancy, Dying Light, which was released in January, is crawling with them, which shows quite emphatically that the entire zombie genre is alive and well and if anything, enjoying a very healthy renaissance. My interest in zombies was jolted back into action by The Walking Dead and I haven’t looked back since. Video games are the perfect media for the undead and over the years the subject has been exploited with varying degrees of success. Dying Light was developed by Techland, the same Polish team responsible for Dead Island, another zombie survival chop-em-up and by teaming up with Warner for this game, they decided that they wanted more of a visceral and technically superior survival game than a simple hack and slash. 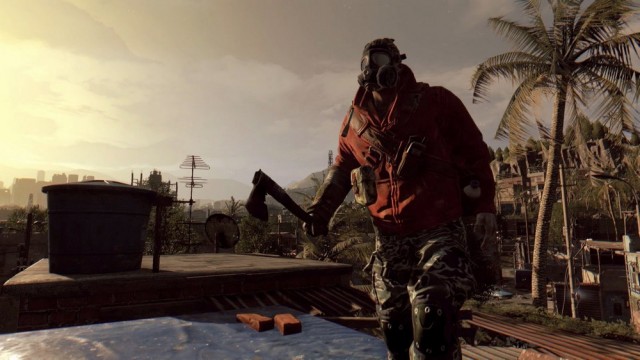 How does it play?

A zombie apocalypse set in an open world where survival is the key, using free-running Parkour mechanics sounds like a great premise for any game and in Dying Light it really works, for the most part. The plot, such as it is, involves you playing as Kyle Crane as you infiltrate the zombie infested city of Harran as an agent for GRE (Global Relief Effort) in order to locate and retrieve a very important file. This inevitably involves numerous quests and side missions which have the effect of blurring the principal mission, but I suppose that’s not really the point. You will quickly forget why you’re there as you spend most of the time avoiding and distracting the undead who, let’s face it, just want you for breakfast and it’s fun, scary and at times very challenging.

The clever use of Parkour, in a simplified version of that used in Mirror’s Edge is novel in a zombie game and especially useful when evading the most determined undead, as most of them thankfully can’t climb walls and buildings. There are however some that deviate from the norm, can climb up and over almost anything you can and much like the infected in 28 Days Later , run at incredible speeds and should be avoided at all costs. Neither are the infected of all one type, as some have mutated into hideous undead creatures of varying degrees of gruesomeness, especially in the damage they can inflict on you.

I haven’t been able to ascertain if Harran is the only city in its world that’s infected, or indeed if it’s in Europe, but judging by the numerous accents of the characters, it’s a pretty cosmopolitan place. We have Scots, Australians, Londoners, North Americans and above all, East Europeans who talk in a Slavic/Russian accent and could come from anywhere east and south of Poland. The baddies, whose leader is known as Rais (Arabic for president) all seem to be east European oddly enough and rather comically, the safe house traders are either cheeky chappies from London’s East End or Aussie barrow boys from Sidney, giving you the reassuring feeling that you’re buying something really kosher from them. 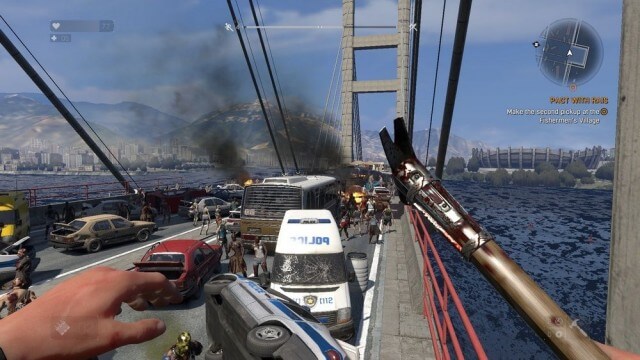 They usually come at night

The day/night cycle of Dying Light is particularly effective and often you find yourself stranded in infested streets just as dusk is coming down, which means finding a safe house is your only option. Either that or fight it out till dawn, but all the monsters come out at night and if you want the chills sent down your spine and you want to die a lot, then be my guest. Having said that, as you progress through the game your skill levels and ranking improve, with surviving a night in the streets adding to your xp points every time you manage it, which can be done if you hang around the highest rooftops for long enough. However, life in the dark is considerably more difficult, the zombies are much quicker and more frightening and you need extra cunning and skill to survive the night, even if the in-game night is measured in minutes as opposed to real-time, it still seems too long for comfort, which is the whole idea really. 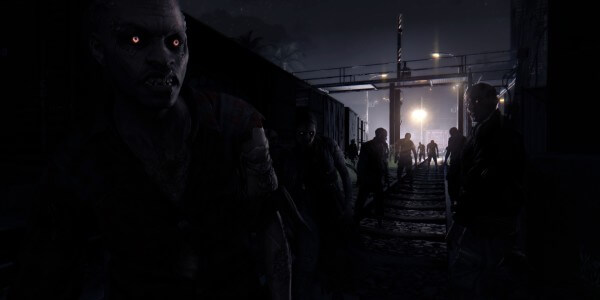 Yesterday, I had the bright idea of taking a safe zone at night, which involved clearing the area of zombies, securing it and switching on the power. Since the zombies were coming at me from everywhere and my chances of survival were pretty slim, I decided to lock myself in the bathroom to sit out the night, sucking my thumb, checking my watch from time to time and only sneaking out the door with my hackles up if I knew the coast was clear. When dawn finally broke, I was awarded with xp points for having survived the night unnoticed and the worst of the zombies crept back to whichever dark hole they inhabit during the day.

It’s easy to see how great a game looks, but many of us overlook how important sound production is to a game and much like the atmospheric sound in Alien Isolation, the sounds in Dying Light and particularly at night, are incredibly effective and will make you tingle at all the wrong moments. The sounds of raindrops on the street, someone running very fast behind you, the wind blowing in the trees or howling around tall buildings are all used to very skillful effect and have you immersed in the game from the very start.

Actually there are even more ways, but this is roughly how many weapons will be at your disposal, either lying around or modified for some interesting effects. Some of these weapons are: 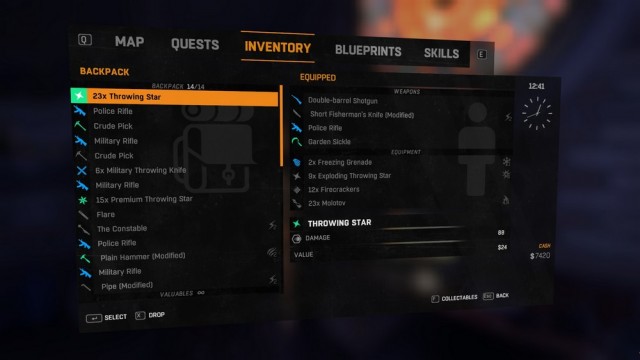 Many of the one handed weapons can be modified to include elements such as fire, ice and electricity which have the delicious effect of rendering the zombie even more insane than their previous state, often ending up paralysed or convulsing and eventually dropping to the floor in a gurgling mass of blood and guts. Hand held bashing weapons do wear out though and whilst they can be repaired by gathering metal parts all over the city, they do eventually become fubar and either have to be dropped or recycled. I’m particularly fond of the crowbar with a mini welder attachment that not only bludgeons the zombie into submission, but also barbeques it nice and toasty, setting the rest of its mates on fire too. Very handy indeed! It’s also a good idea to keep an eye on your surroundings as spiked traps and burning barrels can be used to lure chasing zombies to their timely death, which saves you the effort of wasting ammo or breakage on hand held weapons.

Whilst close quarters combat is satisfying, ferocious and sometimes downright hard, nothing quite beats a good firearm for taking a zombie’s head off from a safe distance. It takes a while to get your hands on a firearm, but believe me, it’s worth the wait and don’t let those zombie combat purists try to sway you; if you can keep it well stocked with ammo, it’s a game changer, particularly against human foes.

Sadly there’s no sniper rifle, which would have been a fantastic addition for use on rooftops as a way of passing the time, particularly with a silencer and we can only hope that Techland includes one in a later DLC.

Using the inventory is crucial to survival in Dying Light and it enables you to construct other throwable menaces such as home made grenades, Molotov cocktails, star shaped metal discs which can explode or ignite, firecrackers to distract zombies and medkits to boost your health, all using blueprints. All the components, cash and other items are scattered around buildings and streets in trash cans, cupboards and other places, not forgetting the dead bodies of zombies which you should always search before moving on. Safe houses generally have a market trader who buys and sells stuff so you can put all that loose change to good use and it’s surprising how much the collectables and cash mount up when you’ve done battle with several hordes of zombies.Everything has some value, even the seemingly useless tat you collect along the way which you can sell on when you get to a safe house. Also, if you find yourself stuffed full of kit leaving no room in your inventory, you can leave items in players stashes at safe houses for use at a later time.

How does it look?

As I’ve mentioned in other game reviews, attention to detail is essential in modern games and Dying Light is no exception. Techland have lavished the game with incredible detail and a decent amount of graphic options to play with, making it a breathtaking game to look at for which you’ll need a beefy PC with at least 4Gb of ram, a quad core CPU and a GTX 560 graphics card. By default however, certain options are enabled such as film grain and chromatic aberration which, with the use of a handy mod Dying Light manager, can be disabled along with the intro movies and loads of other effects, if you want a smoother game experience. Let’s face it, do you really want to watch all those intros when you start the game? 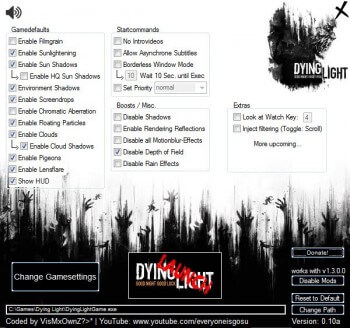 If you’re a die hard zombie fan, this game is a must as it presses all the right buttons and blows almost any other game of this genre right out of the water with it’s looks, scare factor and downright playability.