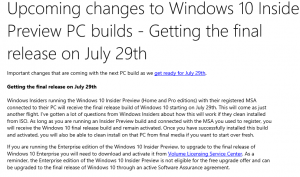 Marc, How do you interpret this news off the Insiders W10 page?

It means that, for those running Win10 from the "Insider Program" and connecting (signing in) through a Microsoft Account, Windows 10 final will be free.

Thanks Jim
OK, don't really understand where MS is going with this, but if I can get the final build ISO, I would seriously consider installing in a VM, just to be able to play with the OS.

I've done both my Win 10 installs through Insider and logged in through my MS account, so I'll let you know how this plays out.
Daniel, why bother with a VM when you can have the real thing (whether you like it or not) on a real physical disk without the restrictions of a VM?

I might add that the "and remain activated" part of that sentence in the blog post has been removed. It now reads "As long as you are running an Insider Preview build and connected with the MSA you used to register, you will receive the Windows 10 final release build". (full stop)

No explanation forthcoming and it now makes the whole thing totally ambiguous.

Evidently MS is already working on another W10 release after the July 29th release. One can only speculate what that really means. 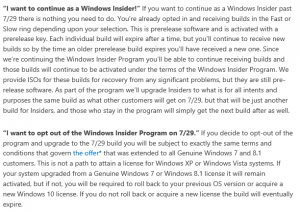 This is an updated statement from Gabe Aul. It pretty well sums up everthing for Windows 10 Insiders and what they can and can"t do on July 29th.

I might just do both for the hell of it. 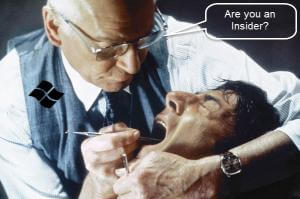 Go for it. Don't let MS tell you what you can and can not do. I'll tell MS the same thing I tell my wife "I'll do what I want".

It's a brave man who says that to his wife Daniel!

When I say that to my wife it is in joking but to Microsoft I will run the OS I am comfortable with and not because it is the latest "fad".

I'm so glad you cleared that up mate. 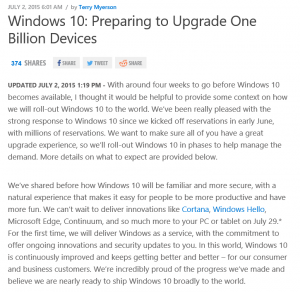 After upgrading to Build 10162 I found this on the Windows Blog. Would someone care to elaborate on the "WE WILL DELIVER WINDOWS AS A SERVICE" statement. Their is more to the article but this just caught my attention.

"Windows as a service" essentially means no more big new major releases of the Windows operating system - new features will added as users go along.

So, instead of new features being delivered en masse every couple of years or so via a new operating system, they'll be delivered in real time, as they become available.

In (say) 2 or 3 years time, Windows 10 will likely be quite different to what it is now but it will still be Windows 10. Whereas previously, those differences would have been delivered via a whole new operating system.

I just upgraded to 10162 this morning.
I haven't noticed any aesthetic differences so it's probably a bug fix release.
https://www.thurrott.com/windows/windows-10/4449/third-times-the-charm-windows-10-build-10162-arrives