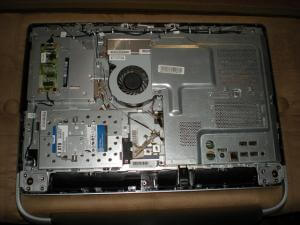 After dealing with all the malware and the two user profiles, which I have partially solved, I now have another issue. The PC now just has a blank screen, and I have tried the old flashlight shinning on the screen.
Let me start with what I have eliminated. I have pulled the HDD and it booted up in the PC I am using now. I have also pulled the CPU and it works in another PC that has a compatible motherboard. In the photo their is a inverter board monted on the CD drive, and I think that will be my next thing to replace. If this turns out to be the motherboard, then I doubt that it will be replaced. I found a inverter board on ebay but if someone else could do a search the # is a Samsung 715G5514-P01-000-0H4K. Thanks Daniel.

I also found a document discussing this exact issue. The HP page won't load, but this should show Google's cached page - http://webcache.googleusercontent.com/search?q=cache:ztgoD1s6kwcJ:h20564.www2.hp.com/hpsc/doc/public/display%3FdocId%3Demr_na-c03561545-4+&cd=2&hl=en&ct=clnk&gl=us

After talking with a HP tech I am pretty sure now it is the motherboard. What he said to do was remove the memory stick and start the PC, and if it started beeping then the motherboard was probably good. Well, the PC I have doesn't beep at all. Wish I knew of an HP motherboard refurbishing business.