I just did a complete re-install of Win 10 Pro and as is usual things don't work and Windows never installs the same way twice. I had just gotten a problem with 'Cortana' having a block screen and very slow. This started with the '20H2-build 19042.630'. Found an Error report with Searchapp.exe. There are many articles on Disabling 'Searchapp.exe, but I want to keep my little search window. Couldn't care less about Cortana. So as many people are having this problem, why is there no conversation going on other than deleting it. I would like it FIXED.

Now, Cortana doesn't lock up with the black screen. It just takes 2 to 5 minutes for it to populate the window and then search for whatever you entered into the window. Many of the comments I have seen say locked up, but my experience is not a lock-up but just an insufferable slowness with it. most of the comments I have read say that it takes up massive amounts of processor power and even overheats the Proc. I am not seeing that. only .3% of the processor was dedicated to SEARCH. For some reason, Windows is not allowing it to function within norman specs. 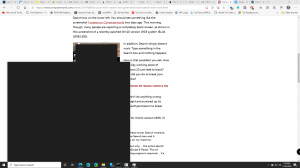 Hi - I didn't want to ignore you but, is there a question in there somewhere or are you just starting a topic for discussion?

As far as I am aware, this issue dates back to February 2020 and was supposed to have already been fixed by Microsoft. I can't locate any references associating this issue with update 20H2.

I tried to search for this in the forum but probably didn't use the correct search terms. It just popped up on a brand new Pro install and Must not be fixed very well because it is broken again right after getting the 20H2 update. I see lots of complaints, and many new ones but no reference to anything other than Microsoft claims it is fixed in the next update which again it isn't. The whole reason I went to Pro was that I had a problem with Home that they couldn't fix and claimed it was and after M$ said their only answer was to reinstall and after 10 reinstalls I got fed up. I am getting close to purchasing a copy of UNIX and say the hades with M$ and I have been a long time M$ hold out and supporter through thick and thin, but they are getting sloppy and careless now that a third party is creating their updates instead of doing it inhouse.