My post over a week ago has not appeared so I am posting on the same topic again. I want to create a disc image backup with Aomei Backupper but as I hope can be seen from the screen snip the program does not detect my C Drive with the Windows 10 OS. Aomei has not replied to my latest emails on this and I suspect they are mystified. Strangely, their Partition manager has the same issue, it does not display my C Drive.

I hope you can help.

Is that a flash drive? If so then maybe you need to unplug some of your usb devices and rescan with Aomei.

Because the drive is only 30GB I'm assuming it must be eMMC (flash) storage. Is the PC some kind of portable device, maybe a 2-in-1 transformer or similar? Please let us know the brand name and model of the PC.

Could you please post a screenshot of the details under Disk Management. Right click This PC and select Manage. In the "Computer Management" window, from the left hand menu, click Disk Management. 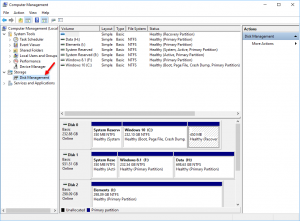 In the most general terms, I'd like to address the problem of a backup program that won't do what you think it should do.

There are a Bunch of backup programs out there, with at least one of them nearly 20 years old, that still works. And that's the one I still use, even for Windows 10 backups. So if you're using one that's not working for you, try a different one. Most have a FREE version.

The biggest problem I've found, (in 36 years) with folks having problems doing backups, is that they don't really understand the basic rules of backing up their computer.

Most important rule of all, is that the Backup/Restore program MUST not be on the OS drive.....because when that drive has crashed, there went the Restore program. (Up in Smoke!)
And of course, the backup files should always be on a removable drive, for safety.

Some years ago, I ran my Backup/Restore program from a Floppy Disk.
Then as the program was updated and would no longer fit on a single Floppy Disk, I switched to a Flash Drive. Since some PC's don't like to boot from a Flash Drive, I copied that program to a CD.

Since 1997, I've used the same program (with updates) for all my HD backup and Cloning. Why? Because it just WORKS!

A man with experience is never at the mercy of a man with an argument.

I am sorry to have taken so long to reply. I am now in email correspondence with AOMEI again. After sending the screenshots to them they have given me a partial explanation of what is happening. I will have to study it more thoroughly as I dont understand it yet, but anyway they are now examining a log from Partition Assistant I sent and I expect that may help them in resolving the issue. I will let you know.

For the record my C Drive is not eMMC, it is a Samsung SSD in a 2-in-1 Tablet PC, a !0.1" Quantum View with Windows 10. The small size of the SSD was becoming a problem until Windows 10 allowed for apps / programs to be run from external drives ---- I use both USB flash drives and SD Memory Cards quite successfully. This alone has made the upgrade to Windows 10 worthwhile.

After further research I have come to the conclusion that my SSD is in fact a Samsung eMMC and as such AOMEI cannot work with it. Following detailed advice I have switched to ASUS TODO which is quite similar to AOMEI without the restrictions. It seems to be very saiisfactory, easy to follow with good options. I have carried out a full Backup to both a USB Flash Drive and a DVD, an integrity check shows it to be OK.

Thanks for the update, Clayto, and for providing a solution!

Persistence and patience one must have when dealing with a machine. I use Todo and it works for me.