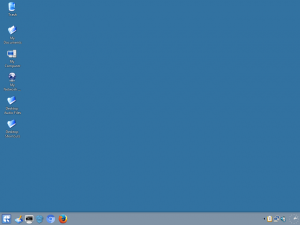 I have had this old Acer AST180-UA350B and decided to see what I could do with it, besides throw it in the garbage. I know it will run W10 but W10 will not update because of compatibility issues with the processor, and W10 was so slow on the PC.
The PSU was bad but I had one to replace it and the hard drive was about to die but I was able to clone Vista, using Easeus, to a Seagate 500GB I had. Vista has issues but it is still running, not worth the time for a fresh install to fix Vista, I will run it as it is.
I tried several Linux Distros before installing Q4OS. Mint, Ubuntu, and even Lubuntu were kinda of slow but Q4OS has been quite the opposite. Q4OS is one of the few Linux ISO,s that can be burned to a 700MB CD, that will boot from most any CD/DVD Drive.
Q4OS does not come with a lot extras but one can install Synaptics, and search and install software. Like Ksnapshot, Gimp, Gparted, Firefox, one can install Chrome but the 64Bit ISO will have to be used, I am running Chromium which comes with the 32Bit ISO.
Using Q4OS will not blow you away with advanced technology, but if one is still running a machine with XP or Vista, it might be worth looking into. 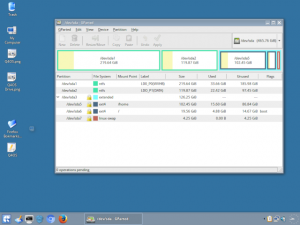 The partition setup was made using gparted with the live CD. /dev/sda1 has Vista installed, /dev/sda2 is for Data with a Easeus image of Vista, /dev/sda3 is an extended partition, made up with three logical partitions /dev/sda5, /dev/sda6, /dev/sda7 swap. /dev/sda5 is /home used for file storage, like the Windows user folder, /dev/sda6 is the / partition where Linux is installed and used as the boot partition, /dev/sda7 is Linux Swap.
If one is running short on disk space, then Linux can be installed with just using the / partition and swap and about 20GB of disk space. I always try and use a /home partition, and if I move to another Linux Distro, /home will never be formatted and all my files are still where they should be.