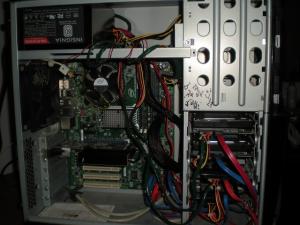 This is the old PC that I have reconfigured around PClinux. This PC was built back in the late
90’s around a Intel DP43BF mobo and a Intel Pentium E6700 3.20GHz CPU, and it is still running,and
has been reconfigured many times.
#1 The top HDD 500GB is the boot drive with PCLinux installed.
#2 The next drive is a 1tb drive with XP install in the 1st 130GB partition, it has three more partition
dedicated for bkup and data.
#3 A 240GB SanDisk SSD that is running Windows 8.1.
#4 A 120GB SanDisk SSD that is running Windows 10.
This is for a machine that can handle more than one
drve. If it can, then install the drive and
run Linux on that drive, and install Grub to that drives
MBR. Use Grub to boot the machine, and use the Grub menu to
select the OS.
If you are, like me, and have tried other distros, and have to use sudo, or enter a PW just to open some programs, then look no further.
PCLinux does not use sudo, you sign in at the sign-in
prompt, and enter the OS. The terminal will open to the user prompt, just use su to enter the root prompt.
You have a choice at PCLinux install to not use a root PW, I do not and I do not deem this a security issue if I am the only user on this PC. If you like typing PW's,then by all means do a root PW.
You will have to use the chown command to get full ownership of your /home/user folder.
PCLinux is a nice semi rolling release distro that can be setup to run mostly like Windows.