Has anybody any experience or other knowledge of HyperOS?

The following link tells you what it claims to do:

and this link (which I've only just found) seems to tell you how (not that I understood more than one word in five):

I've been occasionally looking at this since early XP days when it was priced at nearly £200! (But regular paid-for backup s/w was quite expensive)

Anyway if anyone knows anything or has views, I'd be very interested.

To the site Managers (Dave et AL), I'm sorry that a) this may be in the wrong part of the forum and b), It's about paid for software.

Regards and early Holiday Greetings to all!

I haven't heard of it, but it sounds a lot like virtual machines (VM) to me. If that's the case there could be licensing issues if you're trying to run (as the page states) a different OS on top of the host OS.

Maybe it's creating a VHD (virtual hard disk) of the OS partition and mounting that, but that would require a Pro version of the OS. Not sure exactly how they are accomplishing what they claim, but I could think of several ways to accomplish a backup that would be more "standard" and use recognized practices.

What exactly are you trying to accomplish?

From what I can come up with is this is just Linux based on the Tiny Core Distro. Runs entirely in memory, like Damn Small Linux and really just a fork of this Distro.
Nothing really new here, you can install Oracle or Vmware into any Linux Distro, like Ubuntu or Mint and run any Windows in a virtual machine but licensing will still be an issue and the restrictions on what a VM will do. I run Linux VM's but only on a windows host. Here is a link to Distro Watch http://distrowatch.com/table.php?distribution=tinycore

Thanks Dave and Dan for your inputs.

I'm not sure about the VM angle.

1. It doesn't require the Pro version of Windows.

"Q: Do I need a Host Windows OS to run Hyperos?

A: No, Hyperos is not a Host - Client, Virtual PC system. It is a single boot and boot environment reconfiguration system."

"Q: How long does Hyperos take to install?

A: Around 30 seconds. Just double click on 'install.exe' on the Hyperos CD, this brings up the Hyperos Wizard screen (in Flash) then click on 'Install Hyperos in this system'. Then you need to follow the instructions on the screen which means that you hit 'Y' 3 times, hit 'space bar' 3/4 times and hit 'enter' 2/3 times and that is it. The whole installation takes less than a minute. Hyperos is only 18MB in size. And a Partition Magic 8.0 component is integrated within it. But if you are installing several Windows OSes as well, then these will take the normal time that they take to install."

Perhaps it IS a VHD based system. Maybe it runs the Tiny Core Distro in memory to mount VHDs (up to 10). If so whats with the extra 10 copies, each on a separate partition? Anyway, that sounds like potentially 'flaky' setup to me!

Anyway, Dave you asked what I wanted to achieve, I'm fairly happy with regular backup progs like EASUS and AOMEI, but I am looking for a sandbox facility.

I have tried several times with Sandboxie (Jim was a great help), but having got it working, I found it clunky to use, resource draining when not actually being used.

I'm still a bit confused about HyperOS. It sounds like a bootmanager, but it is obviously writing data if it offers the ability to have multiple versions of an OS and that multiple OS version part would concern me from a licensing standpoint.

Why not look into Virtual Box at https://www.virtualbox.org/wiki/Downloads? There is a slight learning curve to the art of VM creation, but it's quite intuitive if you understand computers It's also fun to play with and rock solid reliable.

You can even download VM's directly from Microsoft at https://dev.windows.com/en-us/microsoft-edge/tools/vms/windows/. They are only active for 90 days, but if you're looking for a sandbox (say software testing or banking as an example) it's great.

You are also not limited to those VM's. You can create a VM and install any OS you have a legal right to use. You can literally have 10 versions of Linux and every version of Windows ever made available on a single computer.

I concur, HyperOS is indeed a tad confusing.

Sounds to me like it is primarily a backup/cloning software which creates identical systems on a single drive. If one system becomes infected or unusable, simply and quickly boot to the next pristine system. Or customize different systems for various specific operations.

Re licensing - this from the site:

JST: Sandboxie has definitely gotten iffy of late. Support for the latest Firefox and Windows 10 not up to par. I've been using Toolwiz TimeFreeze without any issues.

As you are well aware; Sandboxie utilizes an isolation technique. On the other hand, TimeFreeze utilizes a snapshot technique. I've always preferred Sandboxie because simply deleting the contents of a Sandbox is foolproof and safe, whereas rebooting and restoring from a snapshot always entails an element of risk.

That said; as I mentioned earlier, I haven't experienced any issues with TimeFreeze myself.

http://hyperos.io/ Open this link.
Again what is the logic here and the desired end results?

Thanks Dave, I will look at Virtual Box in the new year, I've been putting it off, but I do have a part of the HDD set aside for it.

Thanks Jim, interesting your comments on Sandboxie, shame because the state purpose is ideal.  I will also look at TimeFreeze soon on your recommendation (no blame will be attached)!
Having to reboot isn't too much of a problem to prevent nasties.  I suppose the trick is to group all the dodgy emails, websites and whatever together so that you only have to reboot once at the end of the session. Presumably it would be safe to turn off my AV service if I am definitely going to reboot after.

Thanks Dan for the link, although the "understand only one word in five" rule applies

Hi Guys,
Hyperos has always caused some confusion, in that it is quite a unique application/addon - what ever you want to call it. Essentially is does what it says on the tin. It will clone an existing windows system in minutes and copy it accross the same boot drive or other disk's partitions as required - 10 / 20 systems - or more. In the past I had 6 WinXP Pro systems and 3 Mil on seperate partitions, One for Graphics applications, one for my wife's office, one for mine, one for kiddies games and some for legacy progs etc. A system with a few applications always worked a lot faster, and who wants their desk top cluttered with programs anyway - HYPEROS allowed a few programs on each system, rather than overload a single system with too many programs - fatel on Win XP. Also any windows update, as you will all know, can stuff your system if you hadn't taken adequate backups/restore points, and even if you had. If one of the windows systems fouled up in any way (I always had a copy) I just needed to delete the troublesome system and copy a good sys on to that partition. Sector to sector copies completed in excess of 100MB/s (on and old Intel Pent4 extreme PC with HDD ATA 150) so the whole process took a matter of munutes and I was back up running again. It got me out of the smelly stuff on many occasions. I used to keep all data on the C drive in a FAT32 format so all systems could access, and these I backed up seperatetly. The MD and designer is / was Gordon Richie (think I spelt it right) and first came on the market in 2002/3. I've been using it on that old PC since the 2nd edition and continued through Win 98/Millenium and through to Win XP. Never did bother with Win 8 or 8.1 but eventually when I upgraded to Win7 Pro I did not find the need for it as that system was very robust, kids gone, and only me and the missus using the PC.

Now that I've upgraded to Win10Pro from Win7 Pro, I've looked at Hyperos again, and, although not installed HOS2016 yet, I'm concidering it. Reason? Well, after I upgrated to Win 10Pro, I reinstalled Win 7Pro on a different partition, but I cannot seem to go back and forth as I want to. Currently I'm still using 10, but cannot get back to the reinstalled Win7. Perhaps 2 or 3 or more win 10 systems will do me fine - I also want a seperate system for Flight Sims - .

I suppose this won't make sense to many - Wonder if Gordon is logging this?

Just the sort of info. I was hoping for.

I may well try it, but not before exploring the Virtual Box and Timefreeze approaches suggested above.

I'm a beta tester of HOS and currently testing 2016.

Like Sockeye I've been using HOS since early 2000's,I still use it.

The thing with HOS is that it should be planned and setup accordingly from the start to get best results.

Playing with disks and partitions is not a problem of HOS,it is a windows v bios difference of how they treat them so can occasionally affect HOS operation.
Mostly this isn't an issue with HOS since they addressed the issue.

I'm a gamer,photographer and pc fixer amongst other things.
Each 'pc' a blazing fast and free of clutter because it only has what's needed for that specific enviroment.
Being a pc technician I find it invaluable to have this environment for testing circumstances.
Being able to road test drivers,software updates,new programs etc without fear.

Once setup HOS is as easy as drag and drop.

I was hoping to hear from a user when I first started this thread.

I particularly take your point:

"The thing with HOS is that it should be planned and setup accordingly from the start to get best results."

I sort of suspected this, so I will delay taking the plunge until I am ready to do a full re-install.

Hello, I'm posting in the hope of troubleshooting a HyperOS 2016 problem. I have had no response from the vendor. I just bought it and installed on a brand new Kaby Lake windows 10 system.

I only want to use windows 10, but have about 4 or 5 versions I can switch between.

I had it working fine up until the point I made my 3rd clone, and switched to it. On reboot it gets stuck in a loop trying to rename the directories. I've attached a photo.

Force booting to a command prompt, I believe it has already renamed the directories and just needs to switch to the new clone.

Has anyone used it enough to help me? 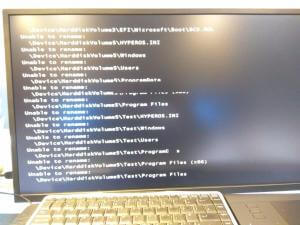 something does not sound/look right.

when booting up keep pressing F8 to bring up boot choice menu.
choose a different partition to boot from,not the one that's having problems.