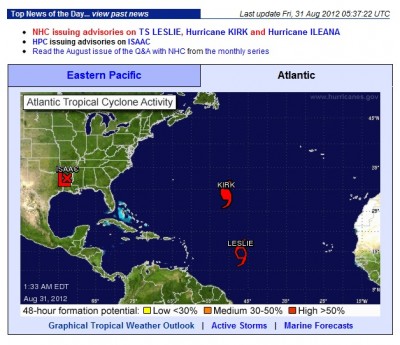 Back on the named storm page, the links at the top give you access to the official Public Advisories, which is deliberately formatted, allowing the data to be scraped by many other weather tools, including some tools we’ll discuss later.  Updates occur generally once or twice a day, but increase to every few hours as a storm is approaching land.  For me, the “DISCUSSION AND 48-HOUR OUTLOOK” all the information I need.  It gives you the wind speed, the category, the size and location, and in my opinion the most crucial piece, the minimum central pressure.

A perfect example would be the “Perfect Storm” in 1991.  Hurricane Grace, a Cat 2 storm, was absorbed by a larger system of low pressure, and became the Halloween Nor’easter of 1991.    This shows that hurricanes are relative lightweights in the overall weather of a region.

This past Tuesday morning, weathermen were suggesting that a large area of high pressure was moving slowly east, and Isaac was bumping up against it, slowed and stalled.. And so Isaac sat there, just off the coast of Louisiana, in that warm water, the pressure dropped to 968 mb, the sustained winds increased to 80mph, and it proceeded to pound on Southeastern Louisiana in what proved to be sustained testing of the 15 billion dollar levee system.  Other levees not included in the revamp were over-topped, flooding some sections near New Orleans.

So, knowing what all the other, larger weather systems in the region are doing, and especially what the Jet Streams are doing, gives us the hurricanes path, and the sea surface temperatures give us the intensity.  Add in all the rest of the math, and we can predict a storms behavior with some degree of accuracy.  And this information shows why hurricanes behave the way they.do.

The Red Cross has setup a Disaster Relief page.

You can help people affected by disasters such as hurricanes like Isaac, floods, earthquakes, wildfires and tornadoes by making a donation to support American Red Cross Disaster Relief.  Donate Now
And if you have any questions or feedback, reply below.