This has nothing to do with computers or technology but it is so bizarre, I just had to share.

FIFA, world football’s governing body which has been ruled for 17 years by an iron-fisted Sepp Blatter, is about to elect a new president. The organization is so steeped in corruption one can’t help but wonder how Mr. Blatter has managed to survive this long, not to mention why legal action has never been taken. Apparently, every man and his dog is aware that FIFA is as crooked as a dog’s hind leg except for those who can do something about it.

Anyway, the presidential candidates have been announced and I must admit to more than a little amusement over the names; they are:

With the exception of Michael Platini, none are exactly household names in the world of football. Seems with corruption and bribery systemic throughout the organization, FIFA’s president is more of a political appointment than anything to do with the betterment of the sport. 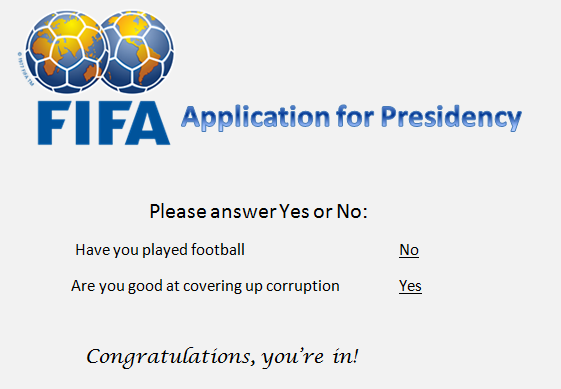 In the end though, I guess almost anyone would be preferable to Sepp Blatter.