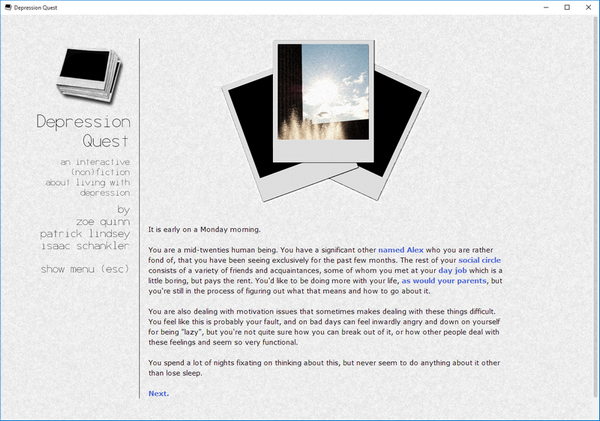 Warning: The title is misleading; this is not a game.

I came across Depression Quest whilst researching the Gamergate controversy, which I later detailed in the article #Gamergate – The New Fundamentalists? and Women and Video Games – Do You Care?, where it was alleged that our protagonist Zoe Quinn had slept with numerous gaming journalists in return for positive reviews of the piece of work she created and which I’m reviewing here.

and according to the developers…

Depression Quest is an interactive fiction game where you play as someone living with depression.

When you start you are presented with an everyday situation described in a short block of text at the end of which you are presented with a set of multiple choice questions which will dictate how you proceed through the quest. There is melancholy background music and some other sounds which change slightly depending on the environment you find yourself in; a party at a friend’s house for example will elicit the sounds of people chatting and such. With about 40,000 words and 150 different encounters, the quest attempts to show you how to manage this illness and at the same time illustrate to those who have little or no knowledge of depression, what may be involved and how sufferers may feel. Also, according to the developer  “Playthroughs are short enough to be done in one day, but long enough for the game to have gotten it’s point across.”

What do I know about depression?

Before jumping in with a review, it’s worth pointing out that I don’t suffer from depression and never have. I have however known others suffering from depression, in particular my ex wife who suffered silently for many years before opening up and it is a very debilitating condition, so much so that on a bad day, nothing could persuade her get out of bed, let alone eat or drink; even communicating was a problem. She later told me that she felt like she was falling into a black hole that simply got deeper and deeper. Fortunately we were able to find the right doctor who prescribed the right medication and she was, thankfully, able to continue a normal life thereafter. I mention this simply to illustrate that depression is very often misunderstood and commenting on it or playing with the condition can very often be a case of playing with fire.

First of all, Depression Quest is not a game in any meaningful sense of the word at all. It’s an interactive set of multiple choice questions that lead absolutely nowhere. Neither is it a quest, which is generally accepted as a journey with a goal at the end of it, at least in mythology.

I started this multiple choice exercise with as open a mind as possible, which wasn’t easy bearing in mind what I’d read about it. I also reminded myself of the times I had looked after my ex wife and worked very hard to be totally positive with her, often to no avail due to the very nature of depression. So, with those two facets sitting heavily on my back, I began the exercise, not sure if I should pretend to be depressed or just be me and look on the bright side of life. I chose the bright side, wrongly.

As mentioned earlier, each page presents you with an everyday situation and you choose how you would wish to react, as per the clip above. Since I wrongly assumed this to be a kind of self-help exercise for depressives, I kept choosing the more positive options like get some work done rather than crawl into bed. This appeared to have the opposite effect to what I was hoping for, resulting in the imaginary character I was supposed to be portraying becoming even more depressed and the choices more negative with every page I turned. After about the fifth page I turned the music off as it was making me profoundly miserable and after the tenth page, I seriously considered giving it all up, but then remembered that I had chosen to review this piece of work.

Are you kidding me? The clip above is so wrong and incongruous that I had to look twice in case they were joking. Having previously told me that I was profoundly depressed and unable to get out of bed, the next thing I’m doing is zooming off in a car, which I’m driving in a clinically depressed state and possibly even suicidal, where absolutely anything could happen. Furthermore, if I were profoundly depressed, I wouldn’t want to see anyone, drive out to see anybody or get together with random people I may have gone to school with. Mind you, I get days like that anyway without being depressed, but that’s just me, so let’s just move on shall we?

So I’ve miraculously arrived in one piece at my Mum’s house and I’m now presented with a few more choices and as I read through the first three, mysteriously blocked off to me, I was beginning to wonder if choice four would perhaps read “..excuse yourself, visit the bathroom and quietly hang yourself “, such is the utter pointlessness and futility of the entire exercise.

Such is my first-hand and albeit limited experience of depression, as I proceeded towards what I fervently hoped would be a swift conclusion, I couldn’t help but conclude that I would never have shown this to my ex wife under any circumstances. It would have made her ten times more miserable, regardless of whether she would have related to any of the given situations.

Playthroughs are short enough to be done in one day, but long enough for the game to have gotten it’s point across.

What the developers rather optimistically refer to as a “playthrough”, I managed to complete in about ten agonising minutes through severely gritted teeth. And no, it wasn’t long enough to get the point across; it would have needed about another thousand or two hours of teeth pulling for that to happen and still there would have been no point.

Just take a look at the wording in the introductory page and tell me what’s wrong. I am apparently a mid-twenties human being and have a significant other, of whom I’m rather fond and they’re called Alex, which means both of us could be androgynous… for a start, this is so clearly written by an angst ridden feminist who takes her morning doses of political correctness intravenously, it’s enough to make you choke on your testosterone quite frankly. Allow me to rewrite that for you Zoe:

You’re a handsome 25 year old man and you’ve been dating Sarah whom you absolutely adore for as long as you can remember etc etc,

When I finally reached the end of this depressing exercise in self-flagellation, I was greeted with a page that informed me that it was never supposed to be an enjoyable experience, it doesn’t have a real end, there is no neat resolution to depression and the outlook they provided was purely their own outlook. Well, I’m glad Zoe and her team cleared that up for me.

It’s not often I’m glad to reach the end of a piece, but in this case I’m more than happy to make an exception. Fortunately Depression Quest lasts no more than about ten minutes and even that’s too long. The developers have classed this as a game and they call themselves game developers; on both counts they are hopelessly mistaken. A video game has atmosphere, a plot, very often a hero, and generally looks nice and is exciting to play. This is none of those things and one of the many things it lacks is guns, so that we could all blow our brains out by page five. This is not a game in any sense of the word and it would be more fitting to describe it as cruelty to the depressed and self inflicted punishment. Games are fun, this is not, so don’t insult us. 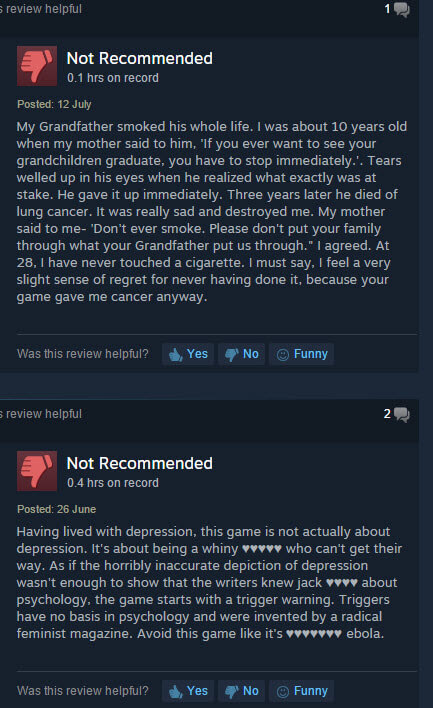 I will concede that the cause is noble, but that’s all. Depression is a subject that is no longer swept under the carpet, but the execution is utterly wrong and in the end, totally counterproductive. There is no light at the end of the tunnel whatsoever in this pretentious and self absorbed piece of rubbish and I wouldn’t recommend it to anyone, let alone the depressed. Furthermore, it offers no hope to sufferers at all, which is the one thing they need, but in their moments of deepest anguish, may not want. It’s the duty of anyone venturing into a subject of such complexity to offer solace and at the very least, a glimmer of hope. It’s all very well to blithely suggest that the suicidal among us run off to the Suicide Prevention Hotline, yet not once suggest that they urgently visit a doctor or psychologist or even seek medication. 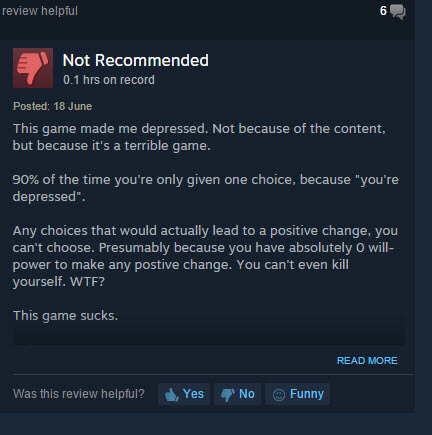 It’s so easy to criticise the work of others and let’s face it, critics are just that; they produce very little or nothing at all. In this case, all the criticism Depression Quest has received is entirely justified for the simple reason that it’s a badly executed and irresponsible piece of  self congratulatory narcissism that should never have seen the light of day.

2 thoughts on “Depression Quest: Misery in the Guise of a Game”