Kirk to Enterprise… Scott me up beamy! 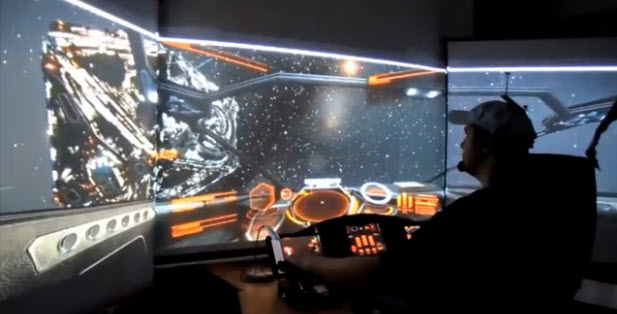 I just love all things outer space. You probably won’t have heard of the “Reach for the Stars” game which involved a 4×4 planetary conquest scenario and was first released for the Commodore 64 and later, somewhat disastrously, re-written for PC. Back in my Commy 64 days I would play that game for literally hours on end, practically consuming every waking hour. So I fully comprehend the gamer’s fascination with certain games.

Dedicated gamers are known to invest quite a bit of money in order to enhance their overall gaming experience but one chap in Germany has taken that to the extreme, building the ultimate rig so he can captain his very own starship.

As well as the 3 high end displays, Mr Boesen’s ultimate rig consists of the following components:

Mr. Boesen does not disclose just how much this all set him back but the math is not that hard to do… it all adds up to a lot of moolah!

Are the results worth the outlay? You be the judge: