By now. we get it. Apple is going to release a new one of (almost) everything, every year. It might get kind of annoying, but really, you can’t blame them. Cell phone companies do the same thing all year long: they feature a new, hot, best, fastest product for $200 (U.S.) with a new 2-year contract every month. True, not everyone needs, or can afford, a new phone or Apple product every year, but there are always thousands of customers who are in need. Apple (just like the mobile carriers) is going to make sure you have the best technology available at the moment, no matter when that moment occurs–now, or in two years. But a savvy shopper wanting to buy when the products are hot of the presses can use the world wide web to easily find out when to buy and when to wait.

I remember Macrumors’ Buyerguide from a few years ago when I bought a Macbook Pro and iPod touch. But I had since forgotten the URL. I’m not trying to be presumptuous in doing your googling for you, but the site was pretty easy to find without reading any of this.

The site is a great resource to any potential Apple shoppers.The very top of the page gives you a traffic-signal color coding beside every different product offered. A green light—usually only active in the first months after a new announcement—means that it’s a great time to buy that iPad, or MacBook Air you’ve recently broken. A yellow light means that the product is either in the middle of their life-cycle, or the current rumor mill doesn’t suggest any upcoming changes. A red light next to a device indicates that, through a combination of hear-say, and the history of Apple release dates, Macrumors suggests you hold off on giving Cupertino your coin.

Scrolling down through the page gives you more details on each product, including product-cycle dates, days since last released, recent iterations of the product line, and even recent rumors about new releases. As you can see in the image below of the iPad information, products expected to be updated sooner rather than later even have a “Don’t Buy” flag to warn consumers. Macrumors, if you’ve never visited it, is a great site with a wealth of Apple knowledge. Their forums can also usually help you find solutions to problems that Apple Support won’t even acknowledge as existing. 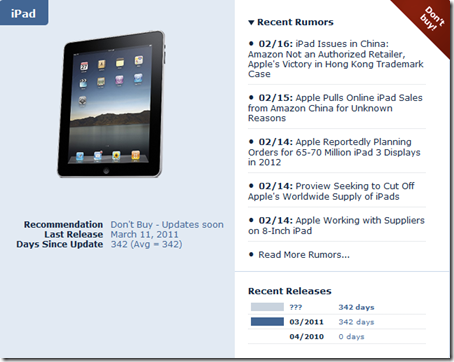