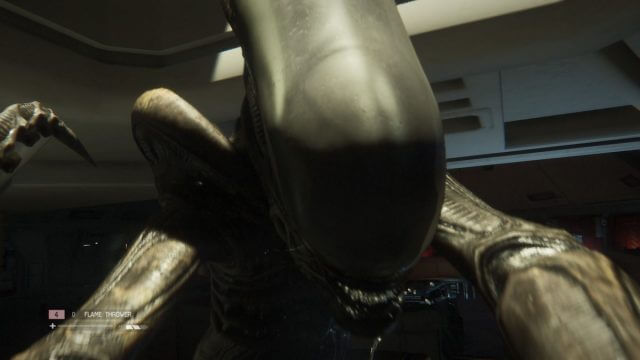 I took a year off and just hid in a locker

I’ve been playing first person shooters for over twenty years and without doubt this is the scariest game I’ve ever played, now more so since I acquired a set of gaming headphones that bring the game to almost total immersion. Some may recall that I reviewed Alien Isolation in March 2015 and in the following months made steady, but halting progress, very often steeling myself to continue, with shivers running down my spine at every turn in the corridors of the Sevastopol. One might ask whether this is a kind of torture and I definitely asked myself the same question when I became completely paralysed with the heebie-jeebies half-way through the game this time last year and simply abandoned it. In fact, in the game, there are very few places where you can hide from the alien, apart from under desks and inside crew lockers, so I chose the latter and stayed there for twelve months, holding my breath and refusing to come out. 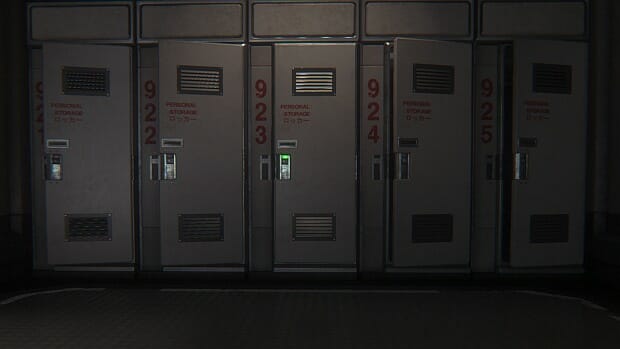 However, lockers are no safe haven from this perfect organism and unless you hold your breath until you pass out, our scaly friend will sniff you out and literally rip you bodily from your hidey-hole. 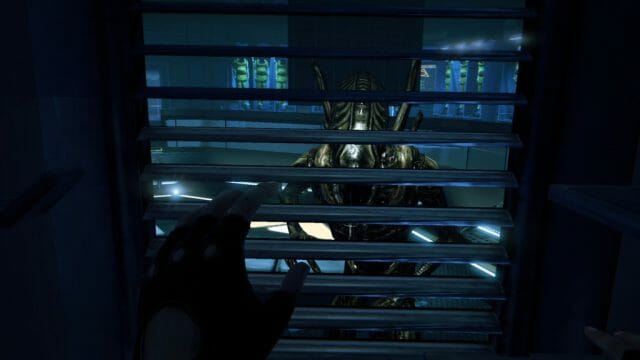 It soon became a case of I’ve had enough of this, let’s race some cars around Le Mans instead, where Big Al can’t find me. But that’s the thing– I was hooked by the fearsome challenge, so a couple of days ago I returned to the mother ship, tentatively opened my locker door, peered out and there he was, waiting for me with that unmistakable toothy grin.

Playing as Amanda Ripley, you navigate your way through the Sevastopol to find the truth about your mother, Ellen, which involves creeping through corridors, air ducts and huge expanses of open areas within the ship, all the while collecting resources, improvising weapons, with the alien always on your tail. In fact, now that I have a 7.1 surround sound headset, I can hear our menacing friend thudding around above, below and beside me in minute detail, or if he’s really close, a low growl accompanied by the rising tempo of scary music which is enough for anyone to request a change of underwear. Even the most menial tasks such as opening doors with levers become herculean efforts, requiring you to look over your shoulder constantly, terrified that he’s going to drop down a ventilation shaft at any moment. These simple ten-second tasks seem to take forever and more often than not, I can hear myself muttering …get a f***ing move on will you! 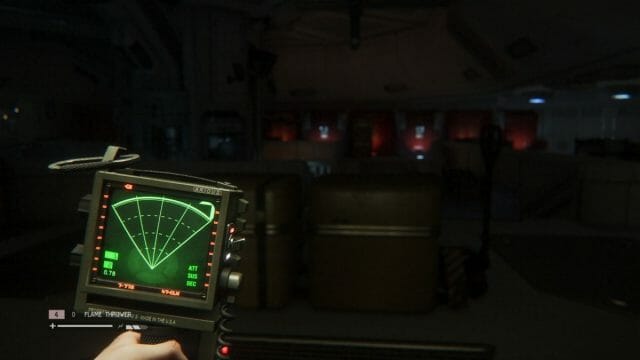 The handheld tracker device is the most useful item in your inventory, but needs to be used sparingly since it emits beeps which rise and fall depending on the proximity of the creature. In fact, it’s not just the alien who’s out to get you– crew members roam the ship, with some seeing you as a threat, as well as the android Working Joes who will creep up on you from behind and grab you by the throat when they see your unauthorised access on a computer terminal. The Sevastopol is therefore a dangerous place to move around in, but not impossible. Although the alien AI is extremely clever, unpredictable and learns from your behaviour, it’s surprisingly easy to hide, crouched under a desk or in a corner where you’ll have a clear 90° view of what may be approaching. I confess to having sat like that for minutes on end, not wishing to move a muscle.

With words alone it’s difficult to convey the sense of menace that pervades every moment and your approach to how you progress is key to not being skewered by the alien. The sensible way to make forward progress is to crouch-walk, which makes no noise at all, but it’s very slow indeed. Walking upright on the other hand is quicker, but your footsteps can be heard squeaking and clattering around, and running can only be used if you know that your nearby destination is a completely safe haven, of which there are very few. One way to describe the game ethos I suppose would be you can’t run, but you can hide, so if my other half finds me hiding under my desk –which is a distinct possibility nowadays– I’ll at least have an explanation, plausible or not. 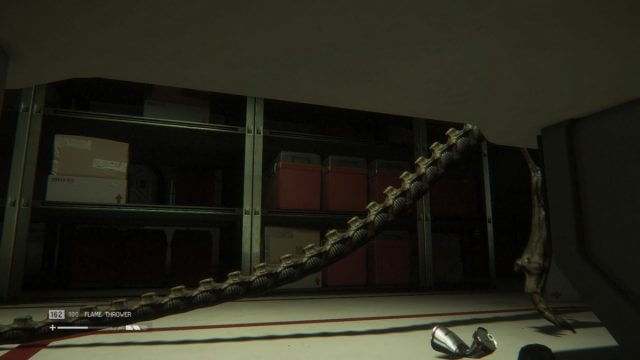 You can cower under a desk until the cows come home, but make a sudden noise, or if the alien’s tail brushes against you, it’s curtains. He also has the annoying habit of pacing up and down near to your hiding place, which makes escape a tad tricky. In those moments you’re just wishing he’d find something else more amusing to satisfy his curiosity– like another human being for example. If not, there’s always a noisemaker available in your inventory, which you can lob in the opposite direction of where you need to run and just hope he’ll take the bait, since he’s predominantly attracted by noise. Since the androids are inanimate, sadly he won’t attack them, and for their part, they see the alien as an unidentified species which they simply log in the computer system as a matter of duty. They will ask the alien dumb questions such as, “What are you?”, which lends a kind of levity to the atmosphere because you know he’ll never answer. Ultimately, you’re on your own then, apart from the occasional instructions passed to you through your radio from colleagues who appear to be relaxing with a nice cup of tea in some other cosy part of the mother ship, judging from their laconic tones.

Sound is the key

Whilst the details of Alien Isolation are visually breathtaking in their 70’s VHS era attention to detail, the intricate sound editing is key to the game’s almost suffocating atmosphere. Every tiny computer whir and bleep is heard, every one of your footsteps seems magnified and the hiss of an automatic door opening or closing will have you cursing at its loudness lest the creature hears it, causing him to pounce through an air shaft at lightning fast speed. 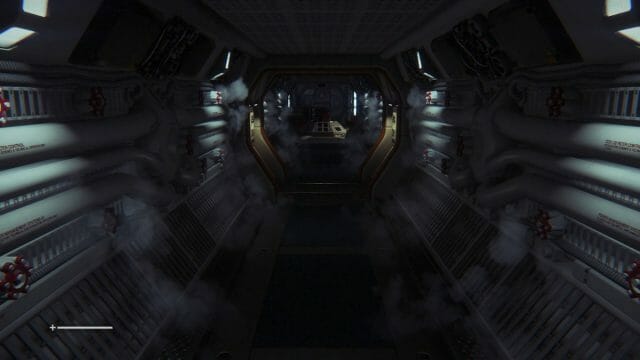 Hearing steam hiss as you pass through corridors lined with pipework, server stations that emit clunking and chirping sounds, all add to the total immersion experience. Nothing else exists outside the world you’re walking through and any sudden noise reaching you from the real world could very well be the creature itself, such is the level of tension running through the whole jump-scare experience. But being the wuss that I am and needing to make at least a little forward progress before next Christmas, I changed the game setting to novice for the first time in my gaming career and I’m glad I did. That feeling of relief when you spot a save station, knowing that the hours of progress will not be lost forever, in spite of being eaten alive several times, is worth all the effort, at least until the next time. That is of course, if your tiptoe walk to the emergency save station isn’t cut short by an alien lance through your chest. 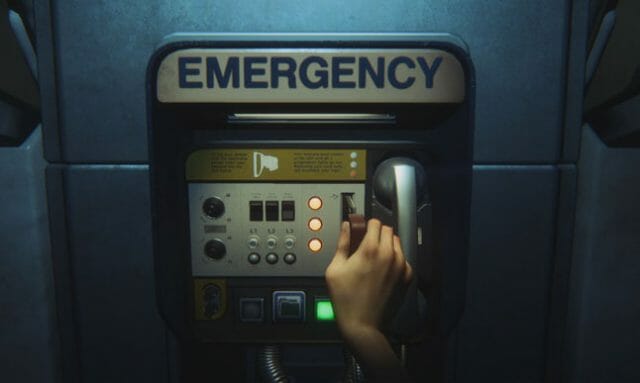 Games should be fun and whilst I’m glad it isn’t a total walk in the park on novice, neither do I want it to be so difficult that my desire to play evaporates completely. I expect I’ll still be finding new objectives and paths to follow for a few more months of spine-tingling game play and suffice to say that out of all the games I’ve ever played, Alien: Isolation remains a masterpiece of undiluted terror, crafted meticulously to a razor’s edge and will live on in my imagination long after the lights are switched off. Here’s a little taste of the atmosphere, which is best viewed during daylight hours and with a close friend or relative to hold your hand.