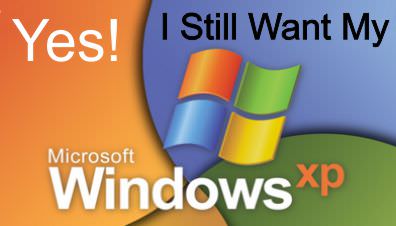 If you have read any of my posts, you know I am all about moving forward with Windows 10. However, there are circumstances when that is not possible, particularly with Windows XP. Some proprietary programs or games just won’t work with an upgrade. Also, many retired people living on fixed incomes are using PC’s that can’t physically support an upgrade and feel they can’t afford a new PC.

This post is about a recent repair for a client that could easily afford a new system, but has become so familiar with XP and the way his system was set up, that options like switching to Linux or upgrading were out of the question. He wanted his system and wanted me to fix it at any cost, well, almost any cost. So, if you too are an ardent XP user, don’t want to change and experience problems, this story might help you.

The client’s system has slowed to a crawl, and in addition, he could not load an “All in One” printer that was XP-compatible. He wanted it “back to new” speed and, of course, with the printer and scanner working.

After checking his system out, I was not surprised. This is a very old computer with no back-ups and the user has no clue of the original disc’s location. It was loaded with useless programs and it contained every Microsoft update from day one. The computer was too old for an upgrade of any kind and only had a 32GB hard drive to begin with and no bay for a second.

Without a possibility of leaving XP, I started by using my standard troubleshooting method. However, every attempt at installing an antivirus, or even Microsoft Sysinternal, would crash the program with a fatal fault.

I immediately thought, in error, that this was a clear sign of an infection by malware or rootkit virus. Scanning with antivirus, and anti-malware programs from a USB disk revealed nothing but some Possibly Unwanted Programs (PUPs) and a couple of Key Loggers.

My next task was to free up some space on the hard drive and remove start-ups and unnecessary programs. No matter what I did I could not get it moving faster than a crawl, nor could I get the printer to install.

The 32GB hard drive was too small to create a new partition and install a new XP. I did have an old XP disk laying around so I attempted a repair. I first backed up all the customer’s personal files and then used Belarc Advisor to obtain all his software and OS keys in case something went wrong. Something went wrong! The repair function not only did not work, but when it came to the “Enter your product key” prompt, unfortunately, none of the keys would work.

Belarc mentions that often the displayed Product Key might be the one the manufacturer substituted. Microsoft does offer a way to retrieve the original Key by using the manufacturer’s key, but it needs access to the computer which was not possible in a half-installed state. Now I was in the position of “Up the creek without a paddle”. It was too late to go back and I could not go forward.

The client had started using a couple of external hard drives so he could access his data on his wife’s laptop. Instead of creating copies and keeping them in sync, he moved some folders from the PC and placed them on one external drive and then moved other folders to another external hard drive. Programs that required those folders, especially multipurpose printers, would create a fatal fault when not found. I believe Windows is also slowed by constantly looking for the missing folders if the drives are not hooked up. After rewriting the registry to redirect where programs looked, it did speed up the system a little but obviously I did not correct enough entries to fix it completely.

I will save you from the part of the story that describes the step by step tasks I performed to get his system back. Needless to say, this is not my first trip around the block.

Knowing that I had all his personal information, my only real possibility was a new install but without a Key, that was difficult.

Finally, I found Get Into PC, a site that offered a “Windows XP SP3 ISO Ready to Boot Image” for Free. I used Partition Wizard, a free bootable partition manager, and merged a 5GB partition to the main partition. Then it was a simple matter of inserting the ISO CD, making sure the CD was bootable from the BIOS, then starting the computer. The CD installed Windows Pro (the client had Home Edition), added all the necessary drivers, and started up into a fresh Windows XP. I literally had only two security updates to make and that was it.

It was a simple matter of reinstalling all his documents, photos, and programs like Open Office, and Avast for protection.

I was very happy to return to the customer a duplicate of what he had but now was no less than 8 times faster, caused no crashes, had a printer/scanner installed, and absolutely everything was free.  Granted I could have gotten there with Linux, but the customer is always right.

If for whatever reason, you need or want to hang onto Windows XP. I hope knowing that even without your original discs or Product Keys you will still be able to recover from any non-hardware situation. I have had to spruce up several XP systems in the past and always managed to get them running at least a little faster– but this one was a killer.

If you use external hard drives, I would recommend not moving folders like My Documents, My Pictures, etc., but rather create copies so when they are not connected you will not experience any problems. On older systems, I would also recommend doing all your work on the computer and copying the finished file, instead of working directly from a slower Flash Drive or USB external drive.

I hope this customer’s fix is helpful to someone else, but for me, it was a lesson learned.

14 thoughts on “When You Just Can’t Leave XP”