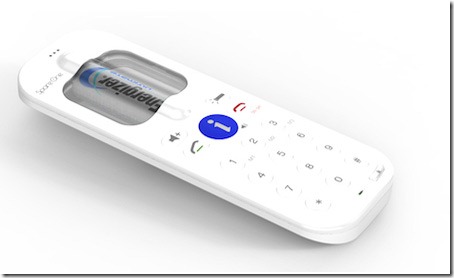 The 2012 Consumer Electronics Show (CES) is underway in Las Vegas this week, and as always, I’ve been salivating over many of the lust-worthy new devices, such as the upcoming PC line from Vizio I previewed yesterday. When I saw news from several different sites and blogs detailing the new SpareOne emergency phone, my left brain and right brain were in agreement. This thing looks beautiful, satisfies gadget cravings, and really just makes sense in a real, logical way. As a carrier of an HTC EVO and two Motorola droids before it, I am accustomed to having a slew of features and apps, but a miniscule amount of battery. Smartphones are (at least for me) equal parts entertaining and utilitarian. This backup/emergency phone is all utility, and it will be there waiting when you’re Smartphone dies from incessant Twitter and Facebook checking.

The big headline catching the dry eyes of those on the net — wishing they were at CES — is that this phone can hold a charge, on standby, for 15 years!  A decade and a half! From one double A battery! AND THE BATTERY IS INCLUDED!!!! The shiny new website associated with this device and company is not one to boast. Just kidding. They’re making sure everyone knows how ground breaking their new phone is. Unfortunately, some of the site reads like a bad translation from a language not-very-different from English.

We broke all records!

Yes indeed. The SpareOne believe it or not can hold its charge if stored unused for up to 15 years or simply the shelf life of the battery inserted. And when in use, we have measured breath taking talk time figures of up to 10 hours

…plenty of time and just from an AA battery

Reading through the FAQ on the site revealed something that will make Verizon and Sprint users a little sad, and scared they might not be supported when the world ends this year: the SpareOne is a GSM only phone requiring a SIM card for sending or receiving non-emergency calls. So I guess this could be your 911 (or other Emergency number depending on your country) phone even without a SIM card. I’m not sure I would sign a contract just to be able to use this thing in case of an emergency or something, but I’m pretty sure T-Mobile has some pretty cheap pay-as-you-go plans that would allow you keep a great emergency phone in your trunk, purse, carry-on, or whatever you have with you when you get in hairy situations.

Here’s a video of someone unboxing the SpareOne and setting it up: