I am a big user of text messaging.  Maybe not when compared to the younger generation but, still, I send and receive more than my fair share of messages.  So, after updating my iPhone 5 to iOS 8, the Messages app is probably the one that I have used the most.   In iOS 8, there’s two new features that I really like. 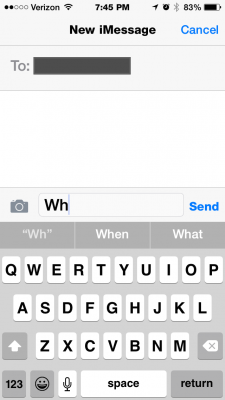 The first feature is predictive typing.   For each word in the message that you are typing, you are presented with a list of words for what your next word might be.  If it is not one of the listed words, you are given a list of possible words as you type the next word.  To select a word, tap on it.  If you find that you don’t like this feature, you can turn it off.  Go to Settings > General > Keyboard and set ‘Predictive’ to Off.

In this example, I was originally presented with the words ‘I’, ‘The’ and ‘I’m’.  Since none of these were correct, I started to type ‘When’.  ‘When’ and ‘What’ were offered as possibilities.  I then tapped on ‘When’ to select it.

Apparently, the Messages app will learn your speech patterns and get better at offering possibilities as time goes on.

The other feature is voice messages.  If you don’t want to type a message, just record it instead.

Step 1:  Tap and hold the microphone icon in the text message row. 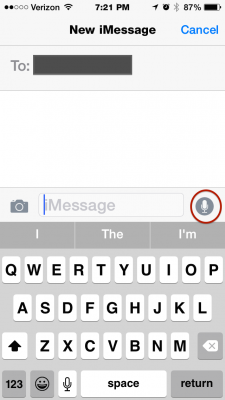 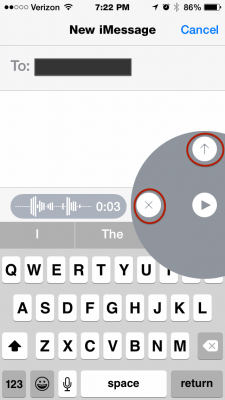 Predictive typing and voice messages — two new features in iOS 8 that have made texting a little easier.