Oftentimes at night, it seemed like my iPhone 4 was buzzing and beeping all night long. Sometimes I would put it on Mute but then I would invariably forget to unmute it in the morning. There wasn’t a good, easy solution to keep my phone quiet at night, short of turning it off. Since I might get an important call, that wasn’t an option.

Then along came iOS 6 and this thing called ‘Do Not Disturb’. It lets you specify a time frame during which you want your phone to be silent. You can allow calls from your Favorites, a certain group or everyone or not allow calls at all. A nice feature is that you can enable repeated calls. If someone calls you twice within three minutes, the second call will ring through. So, it something is urgent, you are not unreachable.

In addition to setting it for a specific time period, such as overnight, you can turn it on at other times as well, such as during a meeting, so you won’t be disturbed.

How do you know that Do Not Disturb is turned on? Easy. A crescent moon appears to the left of the time on your screen.

It only takes a few steps to set up Do Not Disturb. 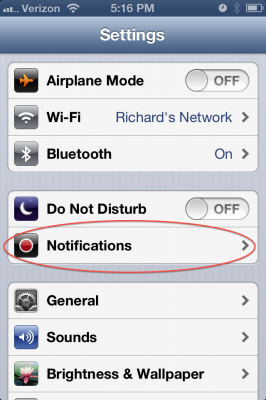 Open the Settings app, then tap Notifications. You’d think you would tap Do Not Disturb, right? Wrong. More on that later. 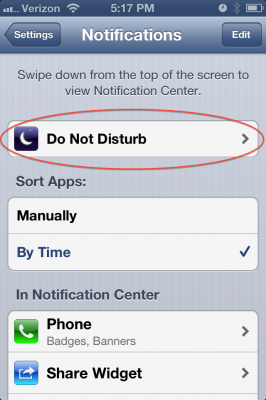 Tap ‘Do Not Disturb’.

STEP 3 – Set up Do Not Disturb time frame. 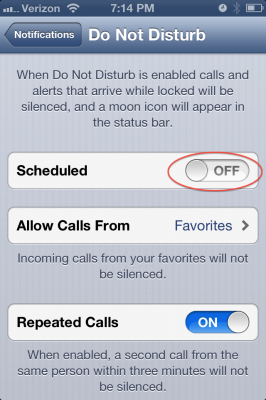 Tap on the On/Off switch next to Scheduled. 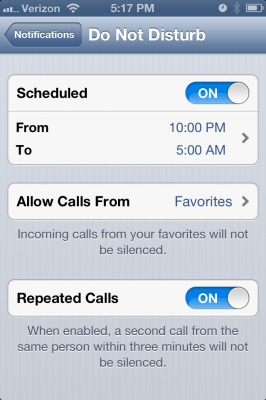 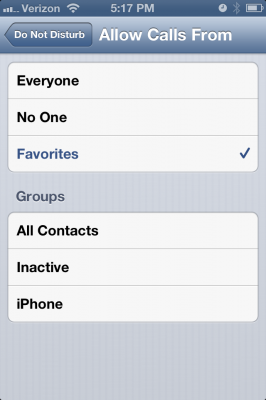 Tap ‘Allow Call From’ and select from whom you want to receive calls — everyone, no one or Favorites. If you have any groups set up, you can select a group instead. When you are done, tap ‘Do Not Disturb’ to return to the previous screen. 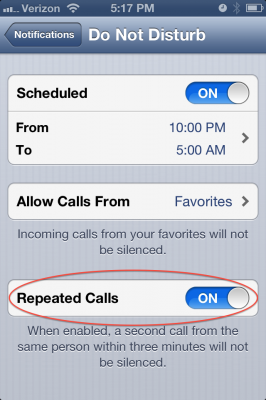 Tap ‘Repeated Calls’ to toggle it On or Off. The theory behind ‘repeated calls’ is that if someone is calling you about an urgent matter, they will call twice within a three minute timeframe and the second call will be allowed to ring through.

So that’s how to set up Do Not Disturb. 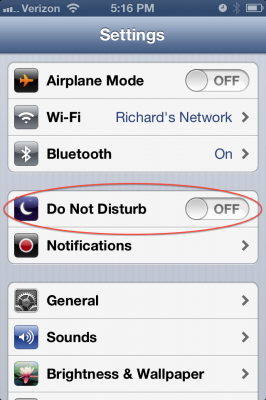 Remember back when we saw Do Not Disturb in Settings? If you are somewhere and you do not want your phone to disturb you, you can turn on Do Not Disturb. The settings that you specified when setting up Do Not Disturb, other than the timeframe, will be in force until you turn Do Not Disturb off. 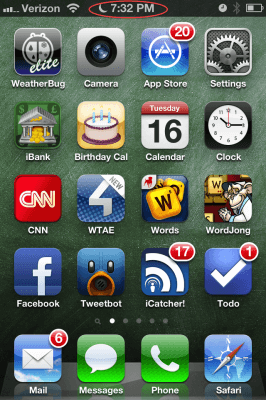 So, how do you know Do Not Disturb is turned on? Easy. Just look for the crescent moon by the time.

Do Not Disturb is a welcome addition to the iOS world. I use it every night and quite a bit during the day as well.