In 1984, Commodore made two additions to their line of computers. 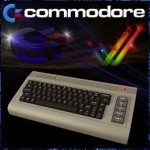 The Plus/4 – originally called the 264 – was released for $300. The &#8220;Plus/4” name refers to the four-application ROM resident office suite (word processor, spreadsheet, database, and graphing).

Learn more about the Plus/4 at http://en.wikipedia.org/wiki/Commodore_Plus/4

The Commodore 16 or TED-16 looked like a Commodore 64 with 16KB of RAM. It was called the “Learning Machine” and often sold for $99. It was intended to compete with other sub-$100 computers from Timex Corporation, Mattel, and Texas Instruments.

Learn more about the Commodore 16 at http://en.wikipedia.org/wiki/Commodore_16