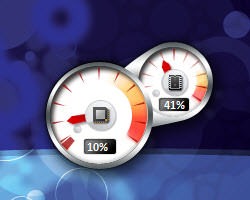 We all love them. They not only dress up our Windows Desktops, but they serve a useful purpose, too. They will show you the weather, time and date. You can monitor your computer health with them. You can follow stock tickers, RSS feeds, and the list seems to be endless. Now, they’re gone.

Beginning with Windows 8.x, Gadgets have  been deprecated and Microsoft no longer supports them. They consider Gadgets to be a security risk too severe to outweigh the benefits.

In Windows 8.x, and Windows 10, too, there is a work-around. You can download a third-party utility that will resurrect our favorite Gadgets. The utility is called 8GadgetPack. I’ve been using it on my computers for a couple years now and it has done its job flawlessly– until now.

I recently acquired an older HP laptop with Windows 10 installed and, of course, after the more important stuff was installed, I immediately zeroed in on my beloved Gadgets. For some reason, even though they worked fine on my desktop PC, there were all sort of quirks on that laptop. The right-click ‘Gadgets’ option wouldn’t work. I had to use the Control Panel to access the utility. Bottom line is that I needed another solution. There was no way that I was going to live without my Gadgets.

Having read many positive articles and reviews over the years I decided to give Rainmeter a try. There were several Gadgets that I wanted to replace with the Rainmeter solution and it turned out to be fairly straight-forward.

I must warn you that Rainmeter is not child’s play. I discovered this early on. The jargon is different to what we are used to. For example, what we have called a Gadget our entire computer lives, is now called a ‘Skin’. That is one point that bothers me because I know what a ‘Skin’ is, and it’s not the same thing as a Gadget. We must change with the times, I guess. We just want it to work, right?

Another bit trickier part is how you go about changing settings for these ‘Skins”. It seems that you need to edit .ini files to accomplish this in many cases. Right-click on a Skin (ew, I hate that word), and choose Edit skin from the context menu. You will be presented with a mess like this: 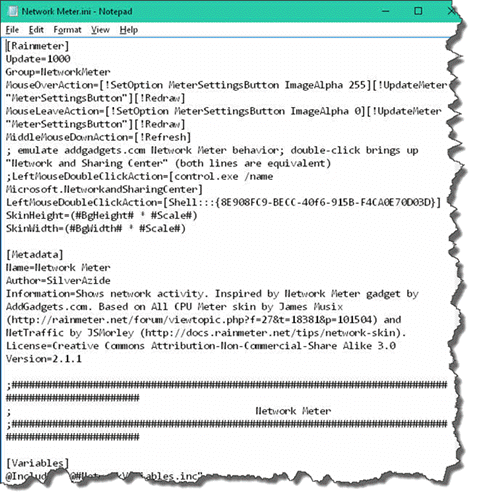 It is now up to you to drill through this file and find the particular setting you are interested in changing. Believe me when I tell you that his can be time-consuming and cumbersome, at best. I should point out that there are some minimalistic settings available by clicking on a little Wrench Icon that will show up when you hover your mouse over the so-called Skin. This is not true of all Skins, however.

The above image shows what’s waiting for you if you choose to edit the Network Meter Skin. That Skin has a Wrench Icon and, if you click it, you will be able to change the size, opacity, colors and a few other basic features. If you really want full control, though, you will have to learn how to navigate those darn ini files.

Skin is not the only new word you’ll need to wrap your head around. A Gadget is now called a Skin. A group of Skins in a single bundle is called a Suite. Your whole Rainmeter setup is called a Layout and can be backed up and copied to other computers if you like. It’s a very flexible system. With that flexibility comes a learning curve but I can see where the rewards may be endless.

Then there are Bangs. Don’t look at me! I didn’t name it. I haven’t looked into these yet but apparently Bangs are used for Skins that interact with each other. You’ll have to read the manual to find out more. So will I. 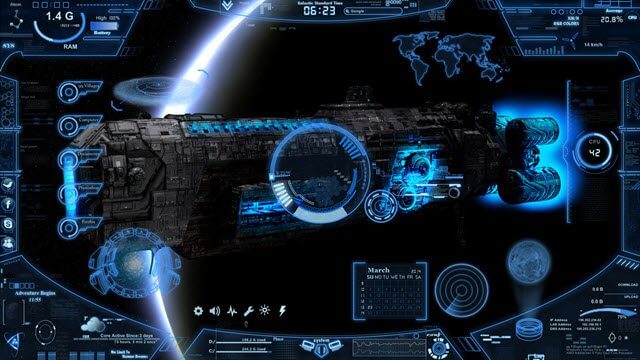 A somewhat frustrating aspect of using Rainmeter is the sheer number of Skins that can be found on the Internet. Probably thousands of them are waiting for you to hunt down and try out. &#8220;Hunt down” are the key words in that sentence. There are so many Skins located in so many places that it can be overwhelming.

There are a few places on the Internet that I trust to vet the Skins they provide. Here is a short-list of those sites:

Rainmeter – This link will take you to the Rainmeter site. There, you will find links to some Skin resources. I’m not sure I would trust Reddit or even the Rainmeter Forums; anybody can submit a Skin there and I don’t know if they are checked for Malware.

Customize – Another place that I trust

Lifehacker – Lifehacker is a wonderful site that will help you in many ways. One of them is how to create full Rainmeter desktop setups that are noted for their quality and creativity. These brilliant designs derive from the creative minds of people just like you.

Another aspect of this is that, with all things Internet, there are scumbags out there who are going to try to screw you somehow. Yep, once again we have to talk about security.

Rainmeter’s own site has this caveat regarding security. Pay it heed:

Note: As with anything you download from the internet, a certain amount of caution is advised when downloading and installing Rainmeter skins you get from other than rainmeter.net directly.

If you simply must have a third-party Skin, scan it thoroughly with your favorite Antivirus and Malware scanners before installing it. Even that effort may not be enough since these Skins basically seem to be scripted in which case an AV/Malware scanner may not see anything wrong. I guess the best advice is the same advice we always give people– be smart in your actions, and make backups often. A proper backup schedule will make your system bullet-proof.

It always saddens me to think such a glorious work of technology as the Internet, which helps billions of people every day, is sullied by a relatively small percentage of schmucks.

Thankfully, there is a great Help page that should answer many of your ‘Newbie’ questions, and then some. I’ve been there a lot already. Read the Rainmeter Manual. It is well-organized and easy to understand. If you can’t find your answer in the manual, certainly someone in the Rainmeter Forums will help you. I look at it this way– if you’ve got the problem, somebody else has beaten you to it, and there’s probably a solution already waiting for you if you’re willing to dig for it.

I have a cat problem. A big orange, snaggle-toothed one– he looks a lot like Morris. He likes to dump copious amounts of hair inside my computer. I don’t know how he gets through those tiny vents, but he’s quite clever. For that reason, I like to monitor my CPU temperature.

Recently, my connection to the Internet has slowed to a crawl. I still have no idea what’s going on but part of my strategy towards solving this problem is to keep a Network Monitor on the desktop.

I like to know what the Weather is doing (doesn’t everyone?), so there’s a Weather Meter there, too.