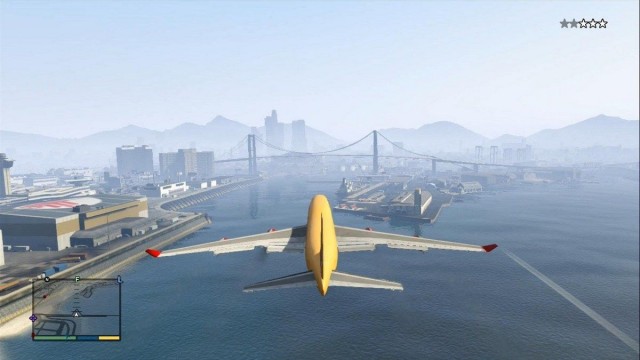 The best video game of all time!

I remember when GTA was launched in 1997 by the small Scottish developer DMA Design Ltd (now Rockstar North) and wallowing in self righteous indignation at the thought of running over innocent pedestrians, mainly old grannies if you were really lucky. In the same year another granny bashing game, Carmaggedon was also launched where you were rewarded for bumping off pedestrians. I remember saying to myself and others ‘That’s just sick that is!’ and vowed never to infect my PC with such wanton violence. Since then, I’ve made my way through countless video games of a variety of genres, always returning to first or third person action games and shooters such as Half Life, Tomb Raider, Max Payne and the superlative eye candy of Crysis. Quite why I decided to camp out on questionably moral high ground at that time is a bit of a head scratcher, particularly as I was at the time, a fully signed up member of the Deport-Mary Whitehouse-Brigade.

Fast forward about twenty years and it’s clear that what was controversial once, no longer carries the same amount of shock factor and it’s interesting to watch the BBC clip above simply to discover that the GTA franchise has pretty much stayed true to its original values all the way through to GTA 5. That is to say, irreverent, non-PC and as the series has progressed, a sardonic wink at we the consumers.

As you can see from the above ESRB rating, the game contains just about everything you’d want in an action game, but what that advisory label fails to mention is the fun you get from racing through the city streets in a muscle car, flying a jumbo jet over the mountains and paragliding down to the roof of the strip club you bought the day before. Yes, the language is strong street language, but not very different from what you hear on TV and frankly, the nudity is the kind of titillation you need to go looking for. But it is nicely done though.

What do you want to do today? 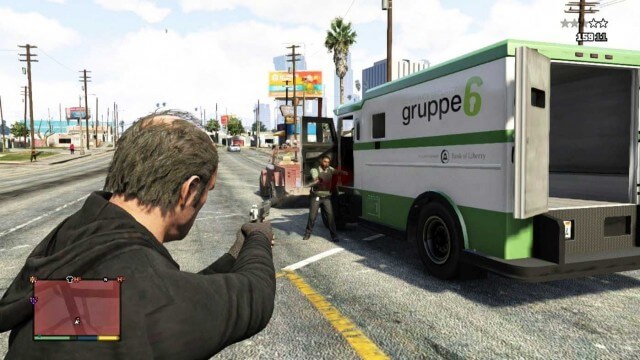 It would probably be easier to ask what you can’t do in GTA 5 such is the scope of the vast selection of in-game activities available. Here’s a taste of the kind of fun stuff you can get up to in no particular order of good taste: 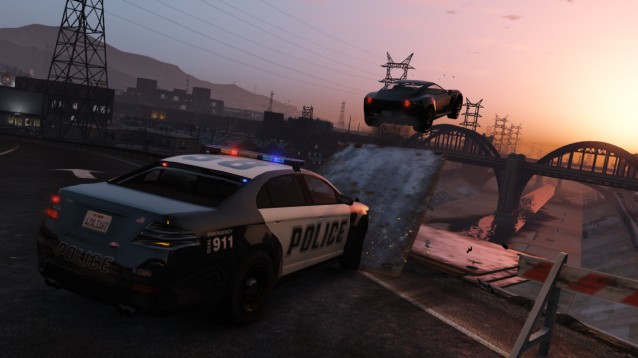 Have you ever been flagged down by the police and just for a split second wondered what it would be like to give them the finger, put your foot down and leave them eating dirt? I know I have and in GTA 5 all that is possible and more. In fact, the cops in GTA 5 are a bit dumb and predictable. Not only that, but they often have some unrealistic expectations of criminals during a car chase, especially when chasing a suspect down a motorway at 120 mph. Having said that, like in real life they do get a tad trigger happy and, depending on the naughtiness of your offence, are prone to shoot first and ask questions later. Naturally you’ll need to defend yourself, so as they’re chasing you through the busy streets of Los Santos and you’re trying your damnedest to avoid mowing down innocent civilians, you can still lob sticky bombs and grenades at the chasing cops whilst they bark orders through their megaphones, such as:

Step out of the vehicle! (Best heard when escaping the cops at 120 mph)

You will stop the vehicle a**shole!

Remove the keys from the ignition! (As if!) 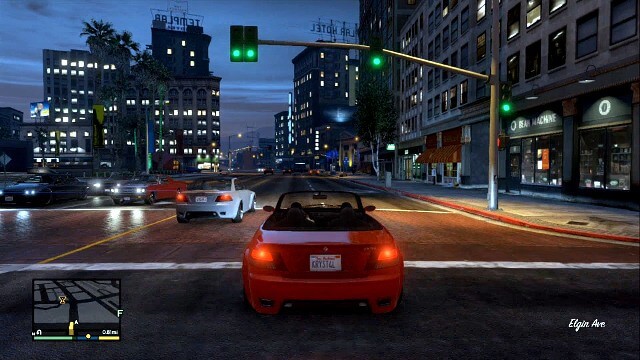 As I mentioned in my original review, this game is enormous with more than 80 main missions, a similar number of side missions and numerous other random events, such that you could find yourself playing the game, not for months, but for years on end. And it doesn’t end there, since the modding community, with a much welcome nod from Rockstar Games, have come up with hundreds of mods to stretch the game even further. For me, if there’s one crucial factor that sells a game, it’s replayability and GTA 5 has it in spades, not least because it’s open world and once you’ve finished the main missions, you certainly haven’t finished the game. It almost goes without saying that GTA 5 Online is where it’s all at and carrying out heists and other fun and deliciously criminal activities with your mates is something I’ve yet to experience much of, but I’m on the case . 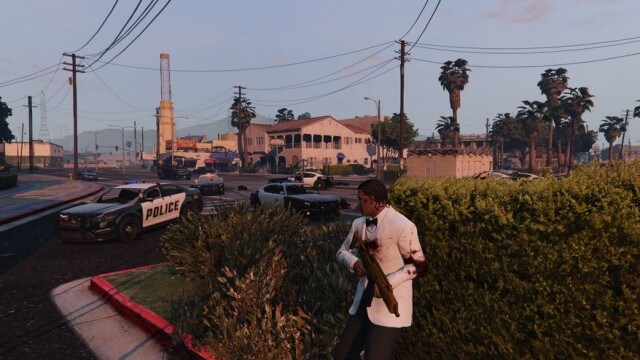 Scary because at its best it’s a reminder of what’s feasible with Artificial Intelligence today and in GTA 5 we have a remarkable game engine in RAGE which can turn some random event into what may happen in real life, albeit with a generous does of poetic license. For example, walk up really close to an NPC (non playable character) as if you’re really getting in their face and they’ll ask you to back off. If you don’t they’ll get nasty and very defensive. The above video is a great example of when the AI is left to its own devices, with the resulting mayhem hilarious or tragic, depending on your point of view. Some would say that it’s a good example of bad AI, that in real life people wouldn’t go plowing into a bunch of cars already piled up at the lights and that it simply isn’t realistic. Further, the reactions of NPC’s in many situations found in GTA 5  just don’t stack up with what happens in real life. Is that so? Most of us play games like this for the very reason that it isn’t real life, but imitates life in the real world and adds a healthy dose of sardonic humour. In the video below I’m playing as Michael on my way to a heist and following a random police car, which in turn is chasing a motorcyclist. Is what happens next a dig at police brutality? Would you have become all righteous if the motorcyclist had been black?

Even at a standard resolution of 1080p, the game looks ultra realistic and now you can get it to look even better using downsampling, which is a method of rendering the graphics over and above native resolution and downscaling to fit your monitor. You will need to update your GPU drivers and for Nvidia (DSR) cards it’s compatible with GTX 470 upwards and AMD (VSR) cards, only R285 and upwards. On my main rig, which sports an Nvidia GTX 970, the game runs as smooth as silk with 60 fps at 1080p and I was able to ramp it up to 3840 x 2160, but with a significant drop in fps to only 20. However, the game is easily playable at that resolution and it does look incredible as the sharper details leap out at you from the screen. Here’s a short clip of how it looks:

I never expected it to be as funny as this, probably because I simply didn’t know what to expect in the first place. I’d already put my sanctimonious nineties views to one side, went in with eyes wide open and I’ve laughed, sniggered and chortled since day one. I can’t think of another game where I laughed out loud so much. In fact, I can’t even think of another video game that made me laugh at all, but then Gordon Freeman and Max Payne were never meant to be funny anyway. On the other hand, Trevor and Michael come across as tragi-comic, a marriage forged in hell if you like but, as in any marriage, step between them at your peril.

Franklin on the other hand, brings less baggage to the ménage à trois and because he’s so laid back, acts as a kind of neutraliser to the other two, especially when things get really out of hand between them. It’s also pretty cool that when Franklin meets up with Lamar in the black neighbourhood where they both grew up, they address each other as nigga this and nigga that, whereas when Trevor hooks up with Franklin, he shows uncharacteristic restraint with greetings such as ‘Aah my n-word, what’s up homie?‘ Or perhaps it’s just Rockstar Games itself giving a nod to the PC brigade?

Should you buy GTA 5? 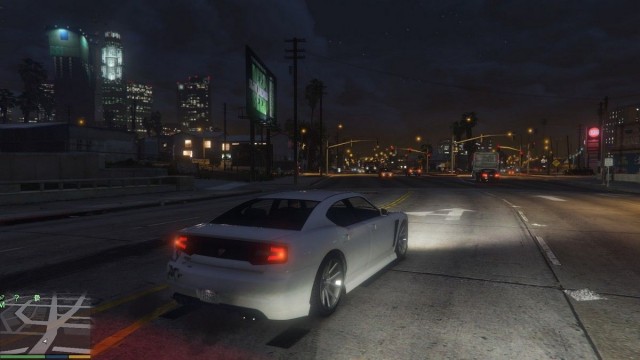 The cost of marketing and development for GTA 5 is reported to have been in the region of $265 million, which is easily into Hollywood blockbuster territory and profits from the game are believed to be well over $1 billion. At around $50 this game packs in more thrills, capers and immersion than any Hollywood film ever could and clearly, bang for buck, it’s pretty much a no brainer when the average cost of a cinema ticket in the US is around $8.10. Further, if you wait for an online sale (Steam for example) you’ll probably catch an even better deal.

Me? I’ve almost finished the main missions and will probably still be playing well into next year, unless I decide to snag GTA 4 at a bargain price and mod the hell out of it, since I seem to be hooked on stealing cars, hanging out in strip clubs and robbing banks these days.