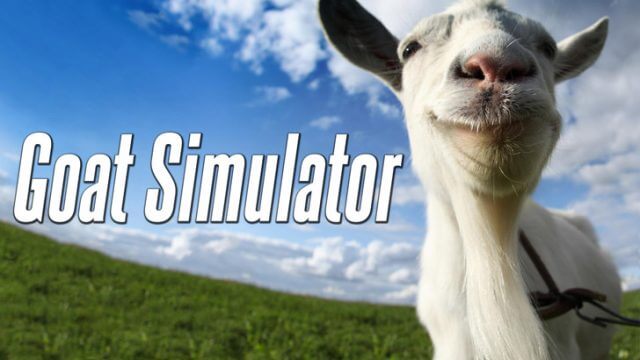 In a competitive game market you need to stretch your imagination and push the creative boundaries in order to get noticed.

And then there’s just weird.

Be a goat, you know you want to. According to legend, Goat Simulator was cobbled together in 24 hours by a couple of blokes who always wanted to be goats. Now it’s your chance to cause as much mayhem as possible. Wreck your neighbour’s house, trash the local petrol station and chew through important cables because that’s what goats do, apparently. In fact, Goat Simulator has gone on to become a cult classic and very successful in its own right.

Shower With Your Dad Simulator 2015

No thanks. I’d rather pull my fingernails out with a pair of rusty pliers. On the other hand, Shower With Your Dad is described as a fast-paced shower  simulation where you shower with your 8-bit dad. Not only that, you can add other dads to the mix if you feel so inclined. Most Steam reviews are overwhelmingly positive oddly enough.

You Must Be 18 Or Older To Enter

According to its developer, the game is all about you discovering the internet in the 90s and finding all those guilty secrets, whilst hoping not to be caught by your parents. Come on, we’ve all been there. Again, You Must be 18 or Older to Enter is another game that has received very positive reviews.

Described by Watching Grass Grow developer as ‘A thoughtful and inspired VR game about watching grass grow during the end of the world. Rain death and destruction upon your foes with your rocket launcher as you fight to the very end to have the most glorious grass in the world.’

I know what I’d rather be doing.

Probably not eligible for weird games per se, but it joins the ranks of other simulator games such as Truck Simulator, Professional Lumberjack, Flight Simulator and even Job Simulator as games where you take on the role you always wanted to when you were growing up trying not to shower with your dad.

Create the perfect pizza, upload it to Facebook and the one with the most likes wins a copy of the game. There’s only one drawback, Pizza Creator doesn’t have any pepperoni, which is a bummer because I’m partial to pepperoni and will more than likely boycott the game for this reason alone. Oh, and you need to use Facebook, which is an even bigger drawback.

Well, we’ve all been there haven’t we? The endless loading screen that makes you wish you could end your life. Well, now you can re-live it in real time. Loading Screen Simulator is described as, “A game about never-ending problem of loading screens. We’ve all experienced it while playing games, while downloading something, while installing an operating system ect [sic].” The music’s very pleasant, but frankly, I’d rather stab my eyes out with blunt Biros.

I Am Bread is best described as the epic journey of bread wanting to become toast, which is really all you knead to know. From the makers of the critically acclaimed Surgeon Simulator, I Am bread will take you and your loaf on an extraordinary journey to guess where? Have you never considered the perils of bread on its odyssey to toast? I know I have.

In Grimsfield you play a down-and-out poet living in the north of England whose goal is to acquire a driving license, whilst endeavouring to overcome the bureaucratic machine. You may also have to learn northern dialect, too, which is a challenge for anyone who isn’t from northern England or anywhere else in fact.

I’m sure there should be a question mark in the game’s title but heck, you play as daddy trying to prevent your baby son from meeting its certain death around the home or possibly even killing it out of frustration. I did mention that this article had the word weird in it, didn’t I?

That’s just a tiny selection of weird, unusual games for you to choose from and frankly, I’m glad I stuck to just these 10 or I really would have been clawing at my eyes and bleeding over my keyboard, and then over yours.