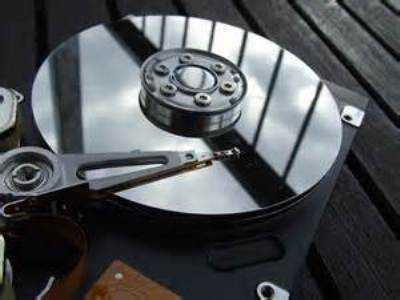 Windows Vista introduced the WinSxS (Side x Side) folder to address problems in previous versions of the operating system. It allowed several versions of the same data libraries to be used from within a single location. Perhaps you have heard the term ‘DLL Hell‘ which plagued the Windows 9x systems?

One of its uses is to store all those Windows Update files that you download on Patch Tuesday and throughout the month. And they never go away. There may be update files that are many years old still unnecessarily clogging your drive.

If you check the size of this folder, you should probably be sitting down for this, it will most likely be the largest folder on your system drive. Mine is over six gigabytes. That’s a full third of the entire space taken up by the operating system itself.

With today’s huge mechanical hard drives this is probably not an issue but on a relatively small Solid State Drive it may become important.

Note: This is one of those folders where you can’t simply go in and begin manually changing things. If you do, things will change all right– and not for the better, either.

We all know about the Windows Cleanup Utility. It has been around since prehistoric times; I know this from personal experience. The utility is used to help people keep their hard drives free of extraneous dead weight. It did have one fatal flaw, however. It ignored all those hundreds of Windows Update files that were no longer needed. These files  multiply at a rate which rivals mice in a corn field.

The latest incarnation of the Cleanup Utility, found in Windows 7/8 recognizes outdated update files and removes them for you. I honestly don’t know if this feature is enabled by default, but no matter– I’m here to show you how to turn it on.

This will work for both Windows 7 & 8. I will show you how using Windows 8 but the basics are the same for Win 7. In Windows 7 you will want to get to the drive Properties Sheet. You can do that by clicking My Computer, then Right-click on the drive of your choice, then choose Properties from the Context Menu that pops open.

On the Windows 8 Start Screen just type disk cleanup, hit <enter> and you should see this: 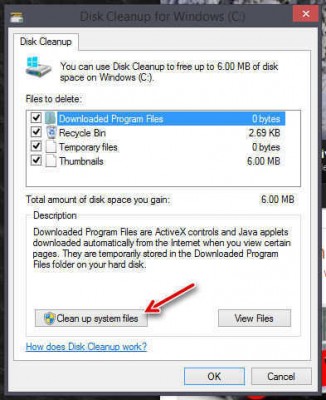 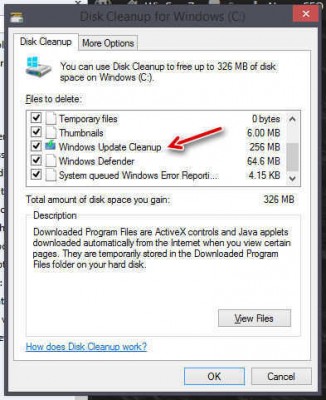 Scroll down in the list box until you see Windows Update Cleanup. Make sure that box is checked and any others you’d like cleaned up as well. Click the OK Button when you’re ready.

Windows will now annoy you with one those “Are you sure you really want to do this (are you of sound mind?) even though you consciously clicked several buttons and intentionally made several choices to get here” prompts. Just click the Delete Files Button and end the misery.

Unless, of course, you aren’t sure, in which case may I suggest a nice, warm cup of tea?

Sit down, relax, and consider fond memories from your childhood. That may help…

Windows will then begin the deletion process. Depending on how huge a mess exists on your computer this may take a little time, though usually only a few to several minutes. A progress bar will show you its, uh, progress.

That’s it! From now on when you use the Cleanup Utility it will get rid of a lot of that Windows update cruft as well. On my system, the first time I ran it, Windows eliminated about 2 gigabytes of old stuff from my puny 80GB SSD and took about ten minutes to complete. I only wish it would show a list comparing a before and after snapshot of the files it removed. No such luck– maybe in Windows 12…

You may have several hard drives so if you’d like to learn how to clean all your drives using these settings with a single click of the mouse, I wrote an article called How To: Clean All Drives With A Single Click and it’s right here on DCT. It was written with Windows 7 in mind but the information applies to Windows 8 as well.

Based on personal observation, Microsoft has never concerned itself with how many files and folders it adds by the thousands. It’s as if they don’t realize the common man doesn’t have banks of hard drives at hand like they do. MS is not the only outfit that thinks this way, so please don’t presume I’m picking on them in particular.

In light of the new cleanup options offered in this age-old utility, perhaps things are looking up in that regard,