I thought I would share an experience I had with a new installation of Emsisoft Internet Security. A problem, by the way, that can happen with a fresh installation of any program. Having worked in the marketing part of industry for quite awhile, I know that product performance is only half the battle and product service is the other half. Companies that perform them equally well are usually successful.

With the incredible number of processes running in the background on any Operating System, and the accompanying programs installed and their processes, it is a wonder that any new installation’s sub-processes don’t butt heads and clash with each other. 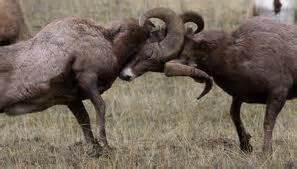 That is exactly what happened when I tried to install Emsisoft Internet Security.

Prior to this, I had installed a 30-day trial of their Anti-malware program. I did not experience any problems whatsoever. I was confident, in fact, because I have already installed the same trial on several of my customers’ computers that had no protection. I never had an issue. After the 30-day trial, the program, if not purchased, will still offer a free scanner instead of the live protection. This is a feature on several Malware-protection programs that I applaud.

The first reason I decided to purchase this program is because of my aforementioned belief that if you are happy with the free version, sooner or later you should consider supporting the software company with a purchase, if for no other reason than to make sure they stay around.

The second reason was because I was impressed with the way the program operated, including the 24 updates a day that it made in the background, checking for any new emerging malicious software– a higher rate, I might mention, than a lot of their competitors. The program behaved well and there were no sluggish periods when background processes were being conducted. The small window that pops up to inform you that an update has just been completed can easily be turned off, which I did.

Now, to the “Rocky Part” of the trip…

After purchasing the software my problems started.  Granted, the version I purchased of the software was the next version up. It included more live checks than the Anti-malware version. Those extra features appear to be what caused a conflict with something on my machine. 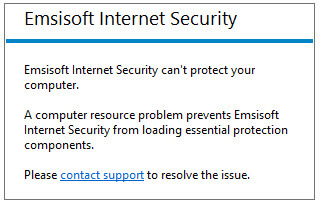 This warning box left me no clue as to the real problem, only that a “system resource” would not allow full protection by the software. These cryptic error messages are something I find all too often in software– just try to look up a Microsoft error code like “0000xx1021292” on the internet.

My first step towards resolving this issue was to check my computer for any existing programs that might cause a problem. A lot of security programs do not behave well with other security programs, so I made sure to remove any traces of existing security software and did a reinstall. No luck.

My next step was to check the company’s Knowledge Base for a possible solution to the problem. After all, I can’t be the only one that has had this message pop up or it would not be included in their program. Nothing!

It is not like it is a graphics program that, if it took a couple of days to fix, you might incur a virus. This is a security program and I believe they should respond in as timely a manner as possible. After all, your computer’s security is at risk. You can see in the image below that three of the four protections were non-responsive. 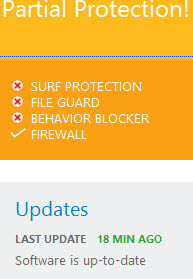 Note: It is normal for this box to be yellow and state “Partial Protection”, that is, until your first scan. Then the box should turn green and all is good. You should never receive red “X’s”.

My next act was to use the “Contact Support” link that was embedded in the warning message. I thought this would bring me a tech person to solve the issue. Unfortunately, it did not. Instead, it supposedly sends an email to the support team and this is where I believe the company made its first mistake. At the very least, an automated response should be sent to the consumer stating the policy, whatever it might be.  Something like, “Thank you for your query.  Tech Support will be in contact with you…”, in 8 hours, 24 hours, etc. This will at least let you know where you stand. No such contact was made.

When I uninstalled the program to try it again, there was a nice survey that asked what they could do better and why I was uninstalling the program. I made it clear what my issues were, but still no response. Their second mistake, in my opinion.

Finally, after sending two requests for help from their “in-program link” and not receiving any response, I sent two emails through my mail client. On my second email, I did receive a standard “Thank you for …”.

To give the people at Emsisoft credit, they finally did work with me and came out with a solution that was as fast as it was effective. The problem appeared to be that the previous installation left a driver on the system. Subsequent installations would try reinstalling that driver and if it already exists on your machine from a previous install it could be one of the reasons for delivering that error message. In any case, they stressed that they prefer to have people contact them for assistance, a process that I hope has the bugs worked out. I also hope their Knowledge Base will be updated to reflect this.

The reason for this post is to inform you that things can happen when installing a new piece of software, and if you follow through, you will soon know the worth of the company. Give them a chance. Frankly, if no clear-cut attempts are made to rectify your problem, you probably don’t want their service.

It appears that, for whatever reason, they did not receive the first two notifications sent from their “in-program link”. So, following up with an email from my computer did the trick.

I don’t think it is our place to outright recommend a particular piece of software over another based on our feelings. I do, however, believe experiences shared can help others through a process and that a particularly bad or particularly good program can be commented on.

In this case, a particularly good piece of software had a particularly bad communication problem that they took the time to fix. If you are considering trying a new Antivirus, Anti-malware and/or Internet Security software, I don’t think you could go wrong with Emsisoft. They graciously offered a refund or a fix. You can’t ask for more than that.

Note: As far as the communication problem goes, the company did say it believes there was a bug and they were “actively working on fixing it”.