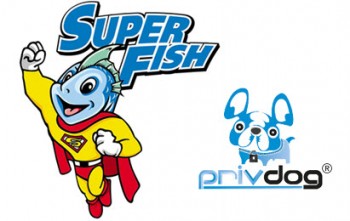 Following fellow author Mark Williamson’s exposé of the Superfish adware pre-installed on Lenovo PCs (Lenovo Distributes Adware on New PCs), news is coming to hand of further instances of Superfish-like intrusions. The most concerning aspect of the more recent revelations is that these intrusions are reportedly even worse than Superfish and emanating from reputable security vendors.

What makes PrivDog an even bigger threat than Superfish is that it intercepts every certificate and replaces it with one signed by its own root key, including certificates that weren’t valid in the first place. This means your browser will just accept every HTTPS certificate thrown at it, making it even easier for attackers to forge trusted credentials that impersonate Banks, Google, or any other HTTPS-protected destination on the Internet.

Lavasoft is involved too!

The hijacker uses Komodia’s redirector platform to allow you easy access to the data and the ability to modify, redirect, block, and record the data without triggering the target browser’s certification warning.

Marc Rogers, a researcher with CloudFlare, has said this means companies which deploy Komodia technology can snoop on web traffic:

These guys can do everything from just collect a little bit of marketing information, all the way to building a profile on you and spying on your banking connections. It’s a very dangerous slope.

Site is offline due to DDOS with the recent media attention. Some people say it’s not DDOS but a high volume of visitors, at the logs it showed thousand of connections from repeating IPs.

** NOTE: PrivDog has since issued an advisory which states that only the PrivDog stand-alone version is affected and Comodo is utilizing a different version which does not include the vulnerability.

The addition of Komodia into the equation certainly complicates the situation. I can’t help wondering how many more so-called browser safety add-ons/software might be utilizing Komodia’s interception technology.

Seems we, as users, not only have to worry about cybercriminals and malware but also about what so-called reputable companies are getting up to as well.

Trust no one! ~ Wikipedia