Phishing: is the attempt to obtain sensitive information such as usernames, passwords, and credit card details (and, indirectly, money), often for malicious reasons, by disguising as a trustworthy entity in an electronic communication – Wikipedia

Phishing scams have been around for some time, however, as our everyday use of mobile devices and the internet in general has increased, so has the threat of phishing scams. Just recently my wife and I both received text messages on our iPhones, within a couple of minutes of each other, purportedly emanating from the ANZ bank: 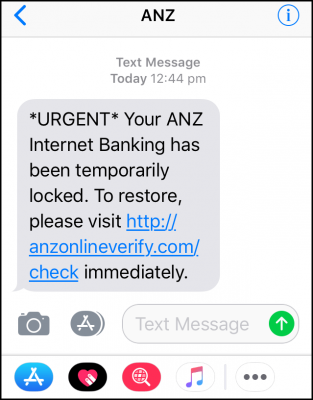 As it happens, my wife and I do bank with the ANZ. However, the ANZ Bank is huge in Australia, so if enough of these types of text messages are sent out at random, the chances of them hitting a large number of ANZ customers is very good. Of course, I didn’t click on the link but rather immediately rang the ANZ Bank to verify the status of my account and report this phishing attempt.

Phishing: What to Look Out For

These types of phishing scams are commonly delivered via two methods –  email or text message.  They will often appear to be from a legitimate source and usually include some sort of incentive – such as to claim money or a prize of some kind. Or, they will press some sort of urgent financial matter which requires the recipient to update or verify their details. The end goal is to entice you into voluntarily revealing critical information, such as banking or credit card details, often via a fake website specifically created for the purpose. If any of the following rules apply, then it will almost certainly be a phishing attempt:

And remember– if it sounds too good to be true, it usually is!

Phishing: What To Do

I must be considered an easy mark because I regularly receive phone calls from these lovely people with a distinctly offshore accent claiming to be Microsoft representatives. The way I deal with them now is, as soon as they’ve introduced themselves, I say… “No you’re not, don’t be so silly“, and that is usually followed by a loud click from the other end as they quickly hang up. How rude!

What these people will tell you is that your computer is transmitting Trojans, or some other similar nonsense, but they can fix it for you in a twinkle. Their end goal is to gain remote access to your computer in the hopes of maybe extracting critical information, such as passwords, banking or credit card details. Remember– institutions such as Microsoft will never contact you via an unsolicited phone call.

It’s a dangerous cyber-world out there folks, tread warily and carefully!

3 thoughts on “How To Identify, Deal With Phishing Scams”