Microsoft has ended retail sales for Windows 8 as of 31st October 2014, almost two years after it was first released and exactly 12 months since the expiration of retail sales for Windows 7. With Microsoft intent on turning attention toward its new Windows 10 operating system and away from the Windows 8 fiasco, this hardly comes as a huge surprise. 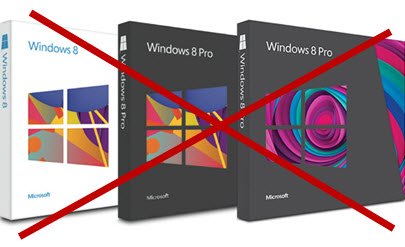 Window 8 will still be on shelves for quite a while yet though as retailers slowly deplete existing stocks… I sense some serious “specials” coming up at some time down the track. No date has yet been specified for when sales of PCs with Windows 8 preinstalled will end, and Microsoft has said it will continue supporting the operating system until January 2023.

October 31st 2014 also signaled the end of sales for PCs with Windows 7 Home Basic, Home Premium, and Ultimate preinstalled. Although again, in reality, as manufacturers and retailers still have large stocks of Windows 7 PCs on hand, it will be some time before these become a scarcity.

A quick check over at NetMarketShare shows the biggest monthly drop (-6.7%) for XP to date during October, with Windows 8/8.1 combined market share enjoying an almost exponential increase:

With Windows 8/8.1 combined market share now sitting at a quite healthy 16.8%, it is poised to overtake XP, although still a very looong way behind the popular Windows 7.

Now slipping to under 14% and trailing Chrome by a considerable margin, the trend appears to be continuing unabated. A worry for both Mozilla and dedicated Firefox users alike.

So, perhaps not quite ‘good’ news for Microsoft but certainly ‘better’ news, and more of the same bad news for Mozilla.